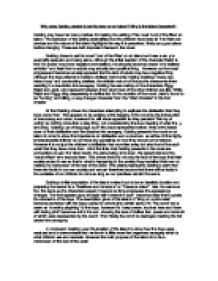 Why does Golding choose to set his story on an island? Why is the is land important?

Why does Golding decide to set his story on an island? Why is the island important? Golding may have had many motives for making the setting of his novel 'Lord of the Flies' an island. The seclusion of the setting exemplifies how the children have been left to their own devices and the nature of the island highlights the way it is perceived, firstly as a good place before changing. These are both important themes in the novel. Golding chose to set his novel 'Lord of the Flies' on an island as it was a way to exemplify seclusion and being alone. Although the initial reaction of the character Ralph is that "no adults" may have negative connotations, he abruptly becomes aware "of a realized ambition" and feels that no adults may actually be a positive thing. ...read more.

is still made apparent as they perceive "this toy of voting" as nothing more than a play thing, not understanding the true meaning of what they are doing. Golding use of language, as in this case represented before, hints at the break down of their civilisation and the dissolve into savagery. Golding presents the novel on an island in order to show the importance od civilisation and a structure as without it the highly impressionable children do not have any guidelines on how they should act or behave. However it is not just the children's civilisation that crumbles away but also that of the adult world that they have come from. All of the links that Golding presents in his novel are connections to war; the "atom bomb, the plane being shot down, the parachutist and the "naval officer" who rescues them. ...read more.

The fruit appears good to begin with however it soon becomes clear that it upsets the stomachs of the boys. The description given of the island of "icing on a pink cake" becomes tarnished with the boys scared to venture into certain parts of it. The conch too is seem as "a worthy plaything" to the boys, however it's "deep cream, touched here and there with fading pink" becomes dull in the sun, showing the loss of civilisation, power and order all of which were represented by the conch. Then finally the conch is destroyed marking the full decent into savagery. In conclusion Golding used the location of the island to show how the boys were secluded and to demonstrate that we live in is little more that organised savagery which is what children see and recreate. However the main purpose of the island is to be a microcosm of the rest of the world. ...read more.

This essay shows a very strong understanding of the text and illustrates points clearly. It would have been very useful to look at the island itself in more detail - its geography, the presence of animals, the use of territory, etc. Nearly top marks! ****