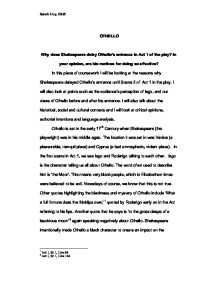 Why does Shakespeare delay Othello's entrance in Act 1 of the play? In your opinion, are his motives for doing so effective?

OTHELLO Why does Shakespeare delay Othello's entrance in Act 1 of the play? In your opinion, are his motives for doing so effective? In this piece of coursework I will be looking at the reasons why Shakespeare delayed Othello's entrance until Scene 2 of Act 1 in the play. I will also look at points such as the audience's perception of Iago, and our views of Othello before and after his entrance. I will also talk about the historical, social and cultural contexts and I will look at critical opinions, authorial intentions and language analysis. Othello is set in the early 17th Century when Shakespeare (the playwright) was in his middle ages. The location it was set in was Venice (a pleasurable, tranquil place) and Cyprus (a bad atmospheric, violent place). In the first scene in Act 1, we see Iago and Roderigo talking to each other. Iago is the character telling us all about Othello. The word often used to describe him is 'the Moor'. ...read more.

This makes the audience slowly agree with these characters, and we believe that Othello is a nasty man. The reason Iago speaks with such poison is because of jealousy that Michael Cassio was promoted to Othello's lieutenant rather than Iago, who is still an ensign. Another reason is that Iago thinks that Othello was having an affair with his wife, we do not know if this is actually true though. Shakespeare has used Iago's character to tell these lies so immediately when we see the kind of person Othello really is, the audience will doubt Iago's honesty and not trust him as much, with this tool, Shakespeare is slowly revealing the audience his plot and the machiavellian mind of Iago. Roderigo and Iago go to Brabantio's house who is the father of the woman (Desdemona) that Othello is in love with. They confront him and tell him about the relationship between the two people and Brabantio is absolutely furious. ...read more.