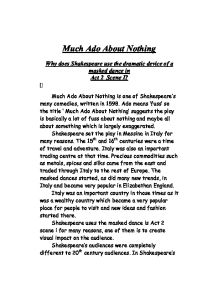 Why does Shakespeare use the dramatic device of a masked dance in Act 2 Scene I?

Much Ado About Nothing Why does Shakespeare use the dramatic device of a masked dance in Act 2 Scene I? Much Ado About Nothing is one of Shakespeare's many comedies, written in 1598. Ado means 'fuss' so the title ' Much Ado About Nothing' suggests the play is basically a lot of fuss about nothing and maybe all about something which is largely exaggerated. Shakespeare set the play in Messina in Italy for many reasons. The 15th and 16th centuries were a time of travel and adventure. Italy was also an important trading centre at that time. Precious commodities such as metals, spices and silks came from the east and traded through Italy to the rest of Europe. The masked dances started, as did many new trends, in Italy and became very popular in Elizabethan England. Italy was an important country in those times as it was a wealthy country which became a very popular place for people to visit and new ideas and fashion started there. Shakespeare uses the masked dance is Act 2 scene i for many reasons, one of them is to create visual impact on the audience. Shakespeare's audiences were completely different to 20th century audiences. In Shakespeare's times nobody could book or reserve tickets or seats, so everyone had to be there early to get a good seat. ...read more.

Movement on stage is also very important because if the actors just stood in one certain place throughout the whole play then the audience would become very uninterested and would start to talk or move, which then becomes extremely off putting for the actors and actresses. The main source of movement in this scene would be the dancing. The music, which would be played on stage, helped to create an atmosphere, which helps to focus and interest the audience. People who weren't specifically interested in the play also had the music they could listen which then kept them interested and focused in play. The contrast between the different couples also helps to keep the audience's attention because the audience are so interested and gripped by what is going to happen between each couple. The different couples behave in different ways because Don Pedro and Hero flirt with each other in a way which isn't so obvious as the two servants Balthasar and Margaret do. Then Antonio is being funny and teasing Ursula but actually Ursula quite like him. The identity between Antonio and Ursula is a hidden identity but it fails. ' I know you by the waggling of your head.' This simply means that Ursula can tell that he is Antonio by the way that he holds himself. ...read more.

The masked dance has also enabled Beatrice to get her revenge on Benedick from Act 1 Scene 1 and has also given Don John the chance to get back at Don Pedro. Movement and music have also been introduced to the play by the masked dance which means the play is more interesting for the audience to watch. The audience have also gained humour from the masked dance because the couples have tried to hide their identities using the masks but the audience have understood what the other person is thinking which makes it amusing to watch. After reading and studying the text and watching the video I found the video a lot easier to understand and listen to. The book became very uninteresting because I found it hard to understand and remember what had happened over the last few pages. As I first thought the play was basically a lot of fuss about nothing although a lot more did happened in the play than I first thought would. I also thought that the play would become very repetitive and would be a lot longer than it needed to be. I found Much Ado About Nothing very interesting and amusing in parts and would much rather study one of Shakespeare's comedies than one of his tragedies. ?? ?? ?? ?? ...read more.