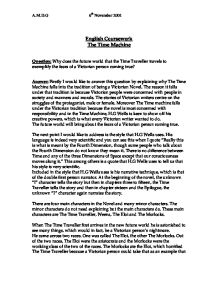 Why does the future world that the Time Traveller travels to exemplify the fears of a Victorian person coming true?

English Coursework The Time Machine Question: Why does the future world that the Time Traveller travels to exemplify the fears of a Victorian person coming true? Answer: Firstly I would like to answer this question by explaining why The Time Machine falls into the tradition of being a Victorian Novel. The reason it falls under that tradition is because Victorian people were concerned with people in society and manners and morals. The stories of Victorian writers centre on the struggles of the protagonist, male or female. Moreover The Time machine falls under the Victorian tradition because the novel is most concerned with responsibility and in the Time Machine, H.G Wells is keen to show off his creative powers, which is what every Victorian writer wanted to do. The future world will bring about the fears of a Victorian person coming true. The next point I would like to address is the style that H.G Wells uses. His language is indeed very scientific and you can see this when I quote "Really this is what is meant by the Fourth Dimension, though some people who talk about the Fourth Dimension do not know they mean it. ...read more.

The last point I would like to address is the fact of the Time Traveller always coming up with hypotheses. This originates to the style of H.G Wells and his scientific language, which he uses to convey across his ideas. In the future world some of the hypotheses The Time Traveller says are very correct. Some of his hypotheses that are very correct are the suggesting of global warming which he says in chapter four, "I saw a great and splendid architecture rising about me, more massive than any buildings of our own time, as yet, as it seemed, built of glimmer and mist. I saw richer green flow up from the hillside, and remain there without any wintry intermission." Also in that quote, The Time Traveller talks about tall buildings, which was unheard of in Victorian times. All the hypotheses show that the creative powers of the Victorian writers were immense and by looking at what the Time Traveller sees in the future world and by the evidence that I have given, we can see that what the Time Traveller does see does exemplify the fears of a Victorian person coming true. L.D.S A.M.D.G 6th November 2001 ...read more.