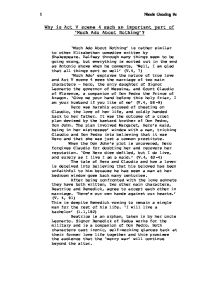 Why is Act V scene 4 such an important part of 'Much Ado About Nothing'?

Why is Act V scene 4 such an important part of 'Much Ado About Nothing'? 'Much Ado About Nothing' is rather similar to other Elizabethan comedies written by Shakespeare. Halfway through many things seem to be going wrong, but everything is sorted out in the end as Antonio shows when he comments, 'Well, I am glad that all things sort so well' (V.4, 7) 'Much Ado' explores the nature of true love and Act V scene 4 sees the marriage of two main characters - Hero, the only daughter of Signor Leonarto the governor of Messina, and Count Claudio of Florence, a companion of Don Pedro the Prince of Aragon. 'Give me your hand before this holy friar, I am your husband if you like of me' (V.4, 58-9) ...read more.

'One Hero dies defiled, but I do live, and surely as I live I am a maid.' (V.4, 63-4) The tale of Hero and Claudio and how a lover is deceived into believing that his beloved has been unfaithful to him because he has seen a man at her bedroom window goes back many centuries. After being confronted with the love sonnets they have both written, two other main characters, Beatrice and Benedick, agree to accept each other in marriage. 'Here's our own hands against our hearts.' (V. 4, 91) This is despite Benedick vowing to remain a single man for the rest of his life. 'I will live a bachelor' (1.1,182) Beatrice is an orphan, taken in by her uncle Leonarto. ...read more.

However, evil Don John is not pardoned but gets the harsh punishment that he deserves. He is captured and taken to Messina where he pays for his actions, his punishment devised by Benedick 'I'll devise thee brave punishments for him' (V. 4, 119-120) 'Much Ado About Nothing' is a vigorous and imaginative romantic comedy, cheerful and accessible for everyone. The plot is fairly witty but is also layered with more serious matters about which men and women falling into a mutual distrust. The convention of music and dancing is used at the end of the play. This symbolises happiness and forgiveness, ending on a happy note. This was a typical convention that was used in many Elizabethan comedies. By using these conventions, Shakespeare gives the audience a warm feeling as they see that good has defeated evil. 1 Nicole Gooding 9c ...read more.