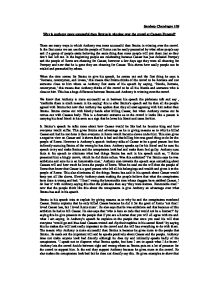 Why is Anthony more successful than Brutus in winning over the crowd at Caesars Funeral?

Sandeep Chandegra 10S Why is Anthony more successful than Brutus in winning over the crowd at Caesars Funeral? There are many ways in which Anthony was more successful than Brutus in winning over the crowd. In the first scene we can see that the people of Rome can be easily persuaded by what other people say and if a group of people starts believing the same thing then more people will join them just so they don't feel left out. In the beginning people are celebrating because Caesar has just defeated Pompey and the people of Rome are cheering for Caesar, however a few days ago they were all cheering for Pompey and now that he is gone they are cheering for Caesar. This shows how easily people can be misled and persuaded by others. When the time comes for Brutus to give his speech, he comes out and the first thing he says is 'Romans, countrymen, and lovers,' this means that Brutus thinks of the crowd to be Romans and not someone close to him where as Anthony first starts of his speech by saying, 'friends, Romans, countrymen,' this means that Anthony thinks of the crowd to be all his friends and someone who is close to him. ...read more.

In the end they support Anthony because he gives more to the crowd. He also makes the conspirators look bad but he does not directly say this. He gives examples to show that Caesar was the opposite of the negative views given by Brutus. The plebeians at the start support Brutus but while Anthony speaks they all slowly start agree with him and they then believe that Anthony is right and the conspirators that killed Caesar are bad and did it for their own selfish needs. He explains to the crowd that what the conspirators have done is that they have slain a noble man who had done everything for the good of Rome and its people. They have killed a noble man who will never be born again in this world. Such men like him only come once, 'here was a Caesar! When comes such another?' when he says this he now has the full support of the people. Anthony also does not try and make himself look good by saying what he says to the public 'I am no orator, as Brutus is, but as you know me all a plain blunt man that love my friend.' ...read more.

Anthony's speech was much longer and more dramatic then Brutus's speech, his speech was short and almost seemed like to the public that he does not care about what he has done and he is only giving these excuses to save him and the rest. In the end Anthony speaks so high of Caesar and to the public that he was expecting to take over rule of the entire empire. Right at the end in quiet he says, 'now let it work. Mischief, thou art afoot, take thou what course thou will.' By saying this he means that the public can do what they want and his plans whatever they were are about to work. This then gives us the impression that Anthony planned something before the death of Caesar and by delivering that speech his plans are now about to work and it could possibly be that he wants to rule instead of Brutus and Caesar and now he is free to do so where as before he was not. This is why Anthony in the end was more successful in winning over the public than Brutus because o his precise timing of delivering his speech and the way it was delivered and how he so easily persuaded the public by saying positive things rather than negative like Brutus. ...read more.