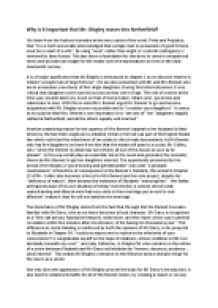 Why is it important that Mr. Bingley moves into Netherfield?

Transfer-Encoding: chunked ﻿Why is it important that Mr. Bingley moves into Netherfield? We learn from the Authors narrative at the very outset of the novel, Pride and Prejudice, that ?it is a truth universally acknowledged that a single man in possession of good fortune must be in want of a wife?. By using ?must? rather than might or could all contingency is removed by Jane Austen. This lays down a foundation for the story to come in unequivocal terms and provides an insight for the reader as to the expectations on men in the early nineteenth century. It is of major significance that Mr Bingley is introduced in chapter 1 as we discover that he is indeed ?a single man of large fortune?. We are also presented with Mr and Mrs Bennet who are in possession (coverture) of five single daughters. During this historical period, it was critical that daughters were married as soon as they were of age. ...read more.

The importance of Mr Bingley stems from the fact that through him the Bennet?s became familiar with Mr Darcy, who as we know becomes a focal character. Mr Darcy is recognized as a ?fine, tall person, handsome features, noble mien, and the report which was in general circulation within five minutes after his entrance, of his having ten thousand a year?. This difference in social standing is reinforced by both the opinions of Mr Darcy, in his proposal to Elizabeth in Chapter 34, ?could you expect me to rejoice in the inferiority of your connections? To congratulate myself on the hope of relations, whose condition in life is so decidedly beneath my own??, and Lady Catherine, in Chapter 56 who remarks on the notion of a union between Elizabeth and Mr Darcy as forbidden by ?honour, decorum, prudence ... [and] interest?. This makes Mr Bingley?s entrance to the Meryton area a vital plot hinge for the novel, as a whole. ...read more.

Finally, the other foremost role Mr Bingley plays is eventually marrying Jane Bennet in Chapter 55, ?? at the rapidity and ease with which an affair was finally settled?. This happy marriage provides Jane with the ability to aid her sister Lydia, both monetarily and with a periodic abode ??assistance towards discharging their bills. Their manner of living ? was unsettled in the extreme ? both of them frequently stayed so long that even Bingley?s good humour was overcome?. To conclude, as we have seen, Mr Bingley?s arrival at Netherfield is of critical importance to the overall storyline. He plays a crucial part by personifying a rich, single man in want of wife which meets the demands of Mr and Mrs Bennet, who have five daughters in want of a husband because of the entail of their property. Clearly his character is vital in the marriage to Jane and benefits the other girls by his associations. Finally, without Mr Bingley, we would arguably not have had the introduction of Mr Darcy, the subplot of Wickham and Lydia or the consternation of Lady Catherine. ...read more.