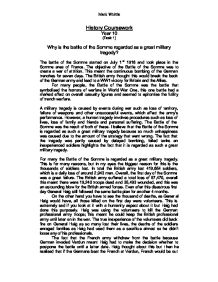 History Coursework Year 10 (Task 1) Why is the battle of the Somme regarded as a great military tragedy? The battle of the Somme started on July 1st 1916 and took place in the Somme area of France. The objective of the Battle of the Somme was to create a war of attrition. This meant the continuous bombing of the German trenches for seven days. The British army thought this would break the back of the German army and lead to a WW1 victory for Britain and the Allies. For many people, the Battle of the Somme was the battle that symbolised the horrors of warfare in World War One, this one battle had a marked effect on overall casualty figures and seemed to epitomise the futility of trench warfare. A military tragedy is caused by events during war such as loss of territory, failure of weapons and other unsuccessful events, which affect the army's performance. However, a human tragedy involves procedures such as loss of lives, loss of family and friends and personal suffering. The Battle of the Somme was the result of both of these. ...read more.

The early start to the battle meant, Haig could not use the tanks he wanted to, or as many as he needed. Therefore the British troops had to struggle with just 49 bad quality tanks. Not only were they slow, travelling at just two mph, they were very unreliable and often broke down or got stuck in mud. This meant that many didn't even make it to the starting line and could not attack; this would have been a huge disappointment as tanks were a major breakthrough in machine warfare. The tanks also failed because they were a new invention and they were still being developed properly. Commanders did not know how to use them properly; therefore soldiers had not been trained to use them to their best effect. Since the users of the tanks were inexperienced, attacks launched on the germens were ineffective. However could it of been the lack of experience that effected the potential of the tank. The army that fought at the battle of the Somme was made up of volunteers from across the country. Due to the huge wipe out of the original British regular army at the start of the war, Britain was desperate to get as many men as they could to help carry on fighting, despite most men having no fighting experience at all. ...read more.

Therefore they were ordered to walk across no mans land in formations to prevent a huge rush of movement. However the soldiers did not make it far. Despite their neat formations, they were sprayed with bullets and killed there and then. For me this is the most tragic aspect of the battle of the Somme. However tragic this is, General Haig did not mind sending these volunteers onto no-mans land for instant death, as long as it meant that the professional British army could be used later on in the war. In his mind they were helping his plan, to break the back of the German army. His battle plan was somewhat questionable but when truly reflection on the outcome of the battle, his tactics worked. To see the battle how general Haig would have looked at it you have to see it in a military prospective. Haig would have seen his best soldiers healthy and ready to fight for their country when desperately needed, but till that time he could use volunteers. When the battle is looked at in this way it could possibly be regarded as a great military victory as we did break the backs of the Germans and all the volunteers who lost their lives helped to do it. ?? ?? ?? ?? Mark Whittle ...read more.