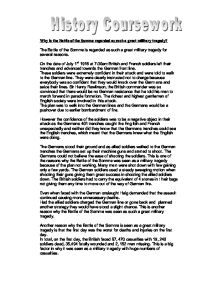 Why is the Battle of the Somme regarded as such a great military tragedy?

Why is the Battle of the Somme regarded as such a great military tragedy? The Battle of the Somme is regarded as such a great military tragedy for several reasons. On the date of July 1st 1916 at 7:30am British and French soldiers left their trenches and advanced towards the German front line. These soldiers were extremely confident in their attack and were told to walk to the German line. They were clearly instructed not to charge because everybody was so confident that they would knock over the Germans and seize their lines. Sir Henry Rawlinson, the British commander was so convinced that there would be no German resistance that he told his men to march forward in parade formation. The richest and highest gentlemen of English society were involved in this attack. The plan was to walk into the German lines and the Germans would be a pushover due to earlier bombardment of fire. ...read more.