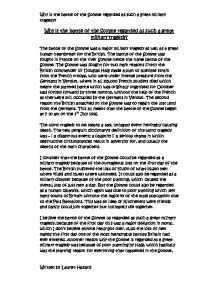 Why is the battle of the Somme regarded as such a great military tragedy?

Why is the battle of the Somme regarded as such a great military tragedy? The battle of the Somme was a major military tragedy as well as a great human heartbreak for the British. The battle of the Somme was fought in France on the river Somme hence the name battle of the Somme. The Somme was fought for two main reasons firstly the British commander sir Douglas Haig made a plan to alleviate strain from the French troops, who were under intense pressure from the Germans in Verdun, where in all 315,000 French soldiers died which meant the planned battle which was originally organised for October was forced forward by three months, without the help of the French as they were still occupied by the Germans in Verdun. The second reason the British attacked on the Somme was to regain the lost land from the Germans. This all meant that the battle of the Somme began at 7 30 am on the 1st July 1916. The word tragedy to me means a sad, unhappy event inevitably causing death. The new penguin dictionary's definition of the word tragedy was - i a disastrous event; a calamity ii a serious drama in which destructive circumstances result in adversity for, and usually the deaths of the main characters. I consider that the battle of the Somme could be regarded as a military tragedy because of the outrageous loss on the first day of the battle. The British suffered the loss of 57,470 of what 19,240 men where killed and 35,493 where wounded. It could also be regarded as a military disaster because of the poor planning, which caused the overall loss of 2,93 men a day. But the Somme could also be regarded as a human calamity, which again was due to poor planning which left many towns of Britain without the majority of the male population due to the Pals Battalions. ...read more.

This could have been why the first day was such a great failure. The first day of battle was in my opinion one of the main if not the main reason that the Somme as reconciled as such a great mishap. Firstly because of the overall total loss of suffered which was 57,470 which 19,240 were killed and 35,493 were wounded which gave a loss rate of one German solider to every eighteen British (in Orilles). The main casualties were especially heavy amongst officers as officers still dressed differently to normal soldiers making them a prime target for German artillery. These were the highest recorded number of losses the British have ever suffered during a battle. It is thought that the British casualties on the first day were "probably more than any army in any war in a single day." The fact on its own could justify the statement why is the battle of the Somme regarded as such a great military tragedy. But this is not only a military tragedy it is also a human one too. For all the men were killed which could have only damaged British morale, even though this enormous loss should have been a indication to change strategy Haig stayed fifty miles behind the frontline in his chateau at Valvion not learning his lesson and still confident with his attack. The first day was a major disaster for the British and maybe it would have been better if the French were not delayed in Verdun and the Somme was not forced forward. The battle of Verdun was another cog in the wheel for the Somme becoming such a misfortune because the French were under such pressure from the German soldiers siege on Verdun. The German proceeded attack on Verdun for ten months were in all the French lost 315,00. Originally the attack on the Somme was meant to be a joint effort, as a result of the battle of Verdun the French were busy defending their grounds from the German attack, consequently the attack on the Somme would have to be made using mainly British soldiers. ...read more.

planned the whole day better then there would not be a huge decline in officers as Haig should have realised a different uniform would provide an easy target for the German snipers. Also Haig making the effort to visit the frontline trenches would have given them the urge of necessity to change his plan. On the other hand help from the French could have affected the loss of casualties. Poor planning consequently gave Haig overconfidence as he was told that "tomorrow you will be able to go over the top with a walking stick, you will not need a rifle" This was by captain martin and was only one of the many exaggerated statements given to Haig in order to excel his confidence to his optimum level. Again if Haig would have visited the trenches he could have known this to be untrue. The final link that makes poor planning to me was the failure of the tanks. The tanks failed twice in the Somme firstly they were not ready for the start of the battle which would have helped them sustain less losses of men. Secondly the tanks were new equipment so none of the soldiers new how to properly operate them. You could also say that there was a third failure factor as they were extremely slow averaging only 2 mph. Why is the battle of the Somme regarded as such a great military tragedy? That was the exam question but who decided it was a great military tragedy? I believe that compared to other battles the Somme went well I have reason to believe this as the battle of Ypres and the hundredth day offence totalled in a much greater loss of men per day. Finally I believe the battle of the Somme was regarded as such a great military tragedy because of general Haigs and Lloyd George poor planning of the battle. Why is the battle of the Somme regarded as such a great military tragedy? Written by Lauren Hazard ...read more.