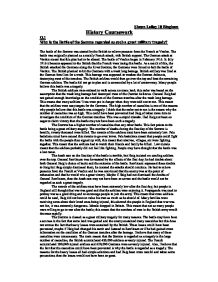 Why is the Battle of the Somme regarded as such a great military tragedy?

Shaun Lalley 10 Bingham History Coursework Q.1 Why is the Battle of the Somme regarded as such a great military tragedy? The battle of the Somme was started by the British to relieve pressure from the French at Verdun. The battle was originally planned as a mainly French attack, with British support. The German attack at Verdun meant that this plan had to be altered. The battle of Verdun began in February 1916. In July 1916 it became apparent to the British that the French were losing this battle. As a result of this, the British attacked the Germans along the River Somme; the Germans were forced to halt the battle of Verdun. The British planned to hit the Germans with a week long barrage. British artillery was fired at the German front line for a week. This barrage was supposed to weaken the German defences, destroying most of the trenches. The British soldiers would then go over the top and beat the remaining German soldiers. The battle did not go to plan and is surrounded by a lot of controversy. ...read more.

The Somme has a higher number of casualties than any other battle. This fact points to the battle being a great military tragedy. The number of deaths during the first day of the Somme is horrific, twenty thousand were killed. The morale of the soldiers must have been extremely low. Pals battalions must have caused this morale to go even lower. Pals battalions meant that people could fight the battle with the people they signed up with, this meant that relatives, villages, etc were fighting together. This meant that the soldiers had to watch their friends and family be killed. Low morale meant that the soldiers probably did not feel like fighting. People may have thought that the battle was a lost cause. The death rate on the first day of the battle is terrible, but Haig insisted on sending soldiers over the top. General Rawlinson was devastated by the effects of the first day; he had doubts about both General Haig's choice of tactic and the outcome of the battle. ...read more.

The Somme is classed as a great military tragedy for many reasons. The battle may have been a success in the fact that some land was gained and the enemy sustained many casualties but this does not excuse the fact that heavy losses were sustained by the British. These losses could have been prevented, maybe if Haig had changed his tactic and listened to Rawlinson or if he had gained more information on the condition of the German trenches after the barrage. I believe that many of these casualties were unnecessary. The main reason that the Somme is regarded as a tragedy is the large number of casualties, the British accumulated 420,000 soldiers severely injured. The French accumulated 200,000 injured soldiers and 650,000 Germans were severely injured. Also, I believe that the fact that the casualties could have been prevented is why the battle is regarded as a tragedy. The reasons for the heavy losses all had simple solutions and had Haig been more careful and taken some precautions then the losses would not have been so great. ...read more.