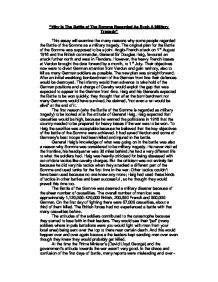 &quot;Why Is The Battle of The Somme Regarded As Such A Military Tragedy&quot;

"Why Is The Battle of The Somme Regarded As Such A Military Tragedy" This essay will examine the many reasons why some people regarded the Battle of the Somme as a military tragedy. The original plan for the Battle of the Somme was supposed to be a joint Anglo-French attack on 1st August 1916 and the British commander, General Sir Douglas Haig, favoured an attack further north and west in Flanders. However, the heavy French losses at Verdun brought the date forward by a month, to 1st July. Their objectives now were to divert German attention from Verdun and gain territory, also to kill as many German soldiers as possible. The new plan was straightforward. After an initial weeklong bombardment of the German front line their defences would be destroyed. The infantry would then advance to take hold of the German positions and a charge of Cavalry would exploit the gap that was expected to appear in the German front-line. ...read more.

Haig was heavily criticised for being obsessed with out-of-date tactics like cavalry charges. But the criticism was not entirely fair because he did vary his tactics when they attacked a different part of the Somme and used tanks for the first time in the war. Other tactics couldn't have been used because no one knew any more; Haig had used these kinds of tactics in other battles and been successful, so he thought they would prevail this time too. The Battle of the Somme was deemed a military disaster because of the sheer number of causalities. The overall number of men lost was approximately 1,120,000: 420,000 British, 200,000 French and 500,000 German. On the first day of fighting there were 57,000 casualties, about a third of them killed. The British forces had not experienced a battle with that many casualties before. The attitudes of the soldiers contributed to the catastrophe because they started to lose faith in their leaders. ...read more.

The Somme brought home to many people that this would be a long, grim war of attrition. The Battle of the Somme was a disaster, it is a popular view and is an easy view to support; the immense loss of life, the pitiful ground gained mad it a total waste. However, should it be regarded as a tragedy at all? The battles objectives were achieved; it relieved a lot of pressure off the French at Verdun, it wore down the German soldiers, which helped a great deal in Germanys eventual defeat. Also Haig had warned that there would be heavy losses and it was the government who failed to prepare the people. The generals were considered to be incompetent, but there was no other way to fight the battle so it isn't right in saying that. It is therefore very difficult to classify The Battle of the Somme as being a disaster or a success. It is a disaster due to the great losses and a success due to the good things that came out of it (i.e. helped weaken the Germans, thus helping to win the war). ...read more.