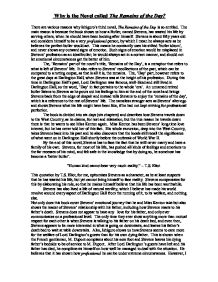 Why is the Novel called The Remains of the Day?

Why is the Novel called The Remains of the Day? There are various reasons why Ishiguro's third novel, The Remains of the Day is so entitled. The main reason is because the book shows us how a Butler, named Stevens, has wasted his life by serving others, when he should have been looking after himself. Stevens is about fifty years old and considers himself to be a very professional person, by which I mean he always acts as he believes the perfect butler would act. This means he constantly uses his stilted 'butler idiom', and never shows any outward signs of emotion. Such signs of emotion would be misplaced in Stevens' profession as an ideal butler; he would always act in a correct manner, and should not let emotional circumstances get the better of him. The, 'Remains' part of the novel's title, 'Remains of the Day', is a metaphor that refers to what is left of Stevens' life. It also refers to Stevens' recollections of the past, which can be compared to a rotting corpse, as that is all it is, the remains. The, 'Day' part, however refers to the great days at Darlington Hall, when Stevens was at the height of his profession. ...read more.

Also, Ishiguro shows us how Stevens seems to care more for the welfare of Lord Darlington's guests than for his own dying father. This is shown when the French gentleman, M. Dupont complains about his sore foot and Stevens leaves his dying father's bedside to be of service to M. Dupont. After Lord Darlington's guests have left and his father has died, he compliments himself on how well he managed to deal with the situation. He believes that it has shown how professional he can be under extreme circumstances. However, I believe that this is the wrong attitude to have, and by neglecting his duties as a son, he should not celebrate such a success, as it is his father who has died. Another moment in the novel where Stevens makes another big mistake is when he dismisses the two German Jewish girls that he had only just recently hired just because Lord Darlington did not want any Jews in his staff. When he passes the news of the German girls' imminent dismissals on to Miss Kenton, she questions Stevens as to why he did not try to prevent it. However, when Lord Darlington realises he has made a grave miscalculation, it is too late, as Stevens cannot find the two girls again. ...read more.

Benn. When Miss Kenton leaves Stevens standing in the rain in one of the final scenes of the book, the reader can tell, through Ishiguro's dramatisation of the scene, that this parting will be the last time that they see each other, and is a critical point in the novel. Stevens tells us that he has only work to look forward to, yet even that may soon end as he tells the reader that he has lost his enthusiasm for the job and feels that he no longer has anything to offer to Mr. Farraday. This is the point, I believe, when Stevens fully realises his isolation to the rest of the world, which has been building up throughout the years. When Lord Darlington was still at Darlington Hall, Stevens created emotional barriers, which he used to block out all emotions from his day-to-day life. However these barriers have remained and made Stevens incapable of any sort of relationship and will be the cause of his loneliness in the latter part of his life. I believe now that Stevens has nothing left to live for; the remains of his life will be spent alone, continuing to serve Mr. Farraday. I do not believe that Stevens will ever have any future relationships because in my opinion, Miss Kenton was his last chance for a family and happiness. Word count: 1586 ...read more.