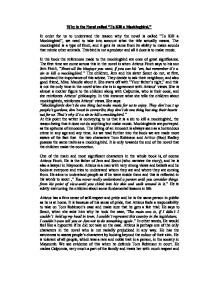 Why is the Novel called To Kill a Mockingbird.

Why is the Novel called "To Kill a Mockingbird." In order for us to understand the reason why the novel is called "To Kill a Mockingbird", we need to take into account what the title actually means. The mockingbird is a type of finch, and it gets its name from its ability to make sounds that mimic other animals. This bird is not a predator and all it does is to make music. In the book the references made to the mockingbird are ones of great significance. The first time we come across this in the novel is when Atticus Finch says to his son Jem Finch, "Shoot all the bluejays you want, if you can hit 'em, but remember it's a sin to kill a mockingbird." The children, Jem and his sister Scout do not, at first, understand the importance of this advice. They decide to ask their neighbour, and also good friend, Miss. Maudie about it. She starts off with "Your father's right," and this is not the only time in the novel when she is in agreement with Atticus' views. She is almost a mother figure to the children along with Calpurnia, who is their cook, and she reinforces Atticus' philosophy. ...read more.

In the courtroom Atticus proves to everyone that Tom is innocent by showing everyone that Tom's left arm is crippled and that he could not have possibly been the one who abused her. During the trial everyone is amazed when Tom admits to feeling sorry for Mayella. He immediately realises his mistake. This is because in society then, a white person would always be superior to a black person, irrespective of age or gender. Even though Tom Robinson's innocence is proven, he still looses. The simple reason being that he was black. Tom has to pay severely for society's stereotypical prejudice that has existed for many years. Atticus knows what the outcome of the case will be, his explanation being that people just were not ready to start thinking so ahead. After the trial when Tom Robinson is put into prison, he looses all hope and tries to escape. Sadly in the process the prison guards shoot him. Atticus takes it upon himself to tell Tom's widow the news. By reading the novel, when we come across the character of Tom Robinson, all we can see is a very honest, kind and law abiding man to whom a great injustice has been done. ...read more.

However there was enough of a distinction to make the trial unfair, this could have been due to the fact that people were afraid of change. For example if Tom Robinson was found innocent by the jury then there would have been an enormous change to the general social hierarchy. In the end the whole point that the novel is trying convey is about tolerance and understanding. It is due to a lack of these things that we get prejudice and discrimination of any kind occurs, whether it is racial or because of gender. If people were tolerant of other people then these problems would not even arise. Atticus is right when he tells scout that to truly understand a person you need to walk in their shoes. By doing this you will understand the person and so will be able to tolerate the person without fearing them because they are different to yourself. Atticus is not the only person in this novel who is able to think ahead. We know that people like Miss Maudie and Heck Tate, the sheriff, are also able to think beyond racial lines. We have come a long way from then, in establishing equality, and yet we still have a long way to go in achieving the perfect world. ...read more.