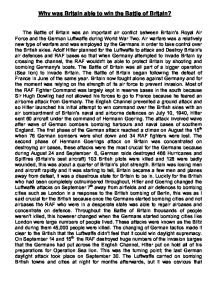 Why was Britain able to win the Battle of Britain?

Why was Britain able to win the Battle of Britain? The Battle of Britain was an important air conflict between Britain's Royal Air Force and the German Luftwaffe during World War Two. Air warfare was a relatively new type of warfare and was employed by the Germans in order to take control over the British skies. Adolf Hitler planned for the Luftwaffe to attack and Destroy Britain's air defences and RAF bases so that when Germany attempted to invade Britain by crossing the channel, the RAF wouldn't be able to protect Britain by shooting and bombing Germany's boats. The Battle of Britain was all part of a bigger operation (Sea lion) to invade Britain. The Battle of Britain began following the defeat of France in June of the same year. Britain now fought alone against Germany and for the moment was relying on the strength of its air force to prevent invasion. Most of the RAF Fighter Command was largely kept in reserve bases in the south because Sir Hugh Dowling had not allowed his forces to go to France because he feared an airborne attack from Germany. The English Channel prevented a ground attack and so Hitler launched his initial attempt to win command over the British skies with an air bombardment of Britain's naval and airborne defences on July 10, 1940, Hitler sent 60 aircraft under the command of Hermann Goering. ...read more.

The system was based around radar, having this radar prevented the RAF suffering the same fate as the Polish air force when it was attacked by the Luftwaffe before it was airborne. Radar stations made it possible to track approaching enemy planes from 100 miles away, and so the British could concentrate their defence just were it was needed. British fighter planes were often in the skies and above the Luftwaffe as they arrived over Britain. This gave Britain quite a large tactical advantage, also Sector stations acted as nerve centre collecting al the information from radar and sending the Spitfires and Hurricanes to intercept the German planes. Reasons other than technological advances also helped in the British victory, one of these being the possession of 'Ultra', the key to Germanys radio codes, this meant that Britain had advance warnings of their plans and so they could take suitable action. The venue of the battle was also an advantage and there for a reason for the British win, because the battle was fought over British territory it meant that if British pilots were shot down they could be sent back into combat quickly and effectively. The British workers also had an impact on the battle, workers in the factories produced an additional 1836 fighter planes when they were most desperately needed. ...read more.

Secondly, although the Germans had good planes such as the Messerschmitt Me 109 and the Messerschmitt Me110, the British introduced two of the best fighter planes ever seen in the Hurricane and the Spitfire. These planes showed the German planes weaknesses of being unsuitable for dog fights and low fuel capacities for travelling and fighting, better planes made for heavy German losses. Thirdly, the RAF was well trained and had better leadership than their German counterparts which made for an advantage during conflict. Fourthly, the venue of the battle was also an advantage and there for a reason for the British win, because the battle was fought over British territory it meant that if British pilots were shot down they could be sent back into combat quickly and effectively. Lastly and in my opinion the largest reason for Britain being able to win the Battle of Britain was the change in German tactics from bombing Britain's naval and air bases to bombing British cities on September 7th in a response to the British bombing of Berlin, this was as I said absolutely crucial for the British because once the Germans started bombing cities and not airbases the RAF who were in a desperate state were able to repair airbases and concentrate on defence, this eventually in my opinion allowed Britain to win the Battle of Britain. ...read more.