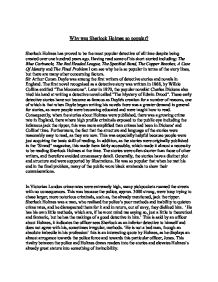 Why was sherlock holmes so popular?

Why was Sherlock Holmes so popular? Sherlock Holmes has proved to be the most popular detective of all time despite being created over one hundred years ago. Having read some of his short storied including: The Blue Carbuncle, The Red Headed League, The Speckled Band, The Copper Beeches, A Case Of Identity and The Final Problem I can see why he is so popular in terms of the story lines, but there are many other concerning factors. Sir Arthur Conan Doyle was among the first writers of detective stories and novels in England. The first novel recognised as a detective story was written in 1868, by Wilkie Collins entitled "The Moonstone". Later in 1870, the popular novelist Charles Dickens also tried his hand at writing a detective novel called "The Mystery of Edwin Drood". These early detective stories have not become as famous as Doyle's creation for a number of reasons, one of which is that when Doyle began writing his novels there was a greater demand in general for stories, as more people were becoming educated and were taught how to read. Consequently, when the stories about Holmes were published, there was a growing crime rate in England, there where high profile criminals exposed to the public eye including the infamous jack the ripper, this was more amplified than crimes had been in Dickens' and Collins' time. ...read more.

Sherlock's methods separate him from many other detectives, as they are very unique to him and are relevant to his character. "No, but I fancy I have deduced a little more" He is very observant, which many of the other methods rely upon, from his observations he has an almost supernatural ability to deduce hidden clues. "He is a genius, a philosopher, an abstract thinker. He has a brain of the first order" Although there is a certain arrogance to Holmes he still has every respect for his opponent, he will never underestimate them and always tries to become familiar with the villain and his mannerisms, before apprehending him. "There is no one who knows the higher criminal world of London better than I do" Holmes had an amazing knowledge of almost every high profile criminal in London, a skill which he exploited to his advantage. "My profession is its own reward" being a detective was not only Holmes' job it was also his livelihood, his obvious enthusiasm is crucial in his success. He will never take interest into a boring, straightforward case instead he always pursues the more challenging and irregular cases, which also makes the stories so popular. "The left arm of your jacket is splattered in no less than seven places" Holmes observational skills were very important in his success, as all of his clues had to be factual, Holmes worked very much upon data and evidence which usually he had observed "ah, I have no data". ...read more.

Each one of the villains was very stereotypical, physically strong intelligent and unforgiving. There were many villains that matched Holmes in his capabilities and there were some very defining moments because of this. A final showdown in the final problem between Holmes and his bitter rival Professor Moriarty proved to be very climactic. "It is inevitable destruction. You stand in the way of not merely an individual, but of a mighty organization, the full extent of which you, with all your cleverness, have been unable to realise. You must stand clear, Mr. Holmes, or be trodden underfoot." This was a threat made by Moriarty, which defines the characteristic of him as a villain. He makes a very direct threat to Holmes life; Sherlock still stands tall and does not fear it. " I know you, you scoundrel. I have heard of you before. You are Holmes, the meddler." This is another confrontation between Holmes and his opposition. These confrontational scenes are very gripping for readers. In conclusion, there is clearly a very wide range of factors that have all had an effect on the popularity of the stories. It is the combination of all these concerning factors that make the legendary Sherlock Holmes all he is today and this is precisely why he was so popular back in Victorian times. From the time of the publishing, to the stories themselves every factor was perfect for the creation of a very popular character. 3 ...read more.