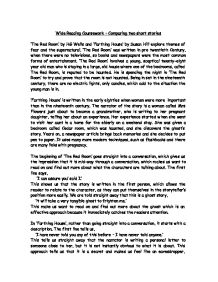 Wide Reading Coursework - Comparing two short stories 'The Red Room' by HG Wells and 'Farthing House' by Susan Hill explore themes of fear and the supernatural. 'The Red Room' was written in pre twentieth Century, when there were no televisions, so books and newspapers were the most common forms of entertainment. 'The Red Room' involves a young, sceptical twenty-eight year old man who is staying in a large, old house where one of the bedrooms, called The Red Room, is reputed to be haunted. He is spending the night in 'The Red Room' to try and prove that the room is not haunted. Being in set in the nineteenth century, there are no electric lights, only candles, which add to the situation the young man is in. 'Farthing House' is written in the early eighties when women were more important than in the nineteenth century. The narrator of the story is a woman called Mrs Flowers just about to become a grandmother, who is writing to her pregnant daughter, telling her about an experience. Her experience started when she went to visit her aunt in a home for the elderly on a weekend stay. She was given a bedroom called Cedar room, which was haunted, and she discovers the ghost's story. Years on, a newspaper article brings back memories and she decides to put pen to paper. It uses many more modern techniques, such as flashbacks and there are many links with pregnancy. The beginning of 'The Red Room' goes straight into a conversation, which gives us the impression that it is mid-way through a conversation, which makes us want to read on and find out more about what the characters are talking about. The first line says, 'I can assure you' said I.' This shows us that the story is written in the first person, which allows the reader to relate to the character, as they can put themselves in the storyteller's position more easily. ...read more.

In 'The Red Room', the tension is still building up. It is set over a short period of time, whereas 'Farthing House' has skipped from the present to the past. I think that at this point 'The Red Room' is more effective because it is more exciting and there is more tension, but the clarity of 'Farthing House' makes us anticipate what is to come. Another key moment in 'The Red Room' is when the young man is inside the room. He is trying to put the ghost stories that he has heard about the room at the back of his mind. The author is exploring the link between the darkness and the mans fear. 'My candle was a little tongue of light in its vastness, that pierced the opposite end of the room, and left an ocean of mystery and suggestion beyond its island of light.' This is an intricate description, using metaphors and personification which paints a clear picture in the readers mind. The man thoroughly searches the part of the room that is lit by the candle to try and put his mind at rest, but the quietness was making him uneasy. As in 'Farthing House' it uses the sense of sound to help us picture what is happening, 'The echoing of the stir and crackling of the fire was no sort of comfort to me.' Here, H G Wells is connecting the quietness with fear. I can see that the man is getting more uncomfortable as he imagines a shadow as a 'lurking, living thing'. The narrator tries talking to himself to break the stillness in the room, but is again frightened by the unpleasant echoing. As the tension builds up, the man is doing everything he can to try and distract himself from the position he is in and to try and avoid admitting that he is frightened because he is determined to prove that there is no ghost. ...read more.

The child was two days old. Her address was given as Farthing House Close, Little Dornford.' Here, the ends are tied in a neat knot for us and leaves nothing to the imagination. The final twist is very unconvincing as it is too convenient and very unlikely. The two stories are two very different stories written for different audiences. 'The Red Room' was written when there was no television so written word was the main form of entertainment, which I think was written more to scare. 'Farthing House' is modern and designed to make the reader think more. Women in particular can relate more to 'Farthing House', as there are many links with childbirth and women are able to feel sorry for the ghost and understand what she is feeling. Men would probably prefer the scarier element of 'The Red Room.' When H G Wells wrote, men were a lot more important than women so therefore he was probably aiming for a male audience. I think that the descriptions in 'The Red Room' are better as they are more complicated and detailed whereas in 'Farthing House' the description is simpler. I think that the ghostly element is more satisfactory in 'Farthing House', but more predictable. In 'Farthing House', the story is set over many different time periods, which is a more complicated layout than in 'The Red Room' where it is set overnight. This allows the tension in 'The Red Room' to be built up in a direct line and gives more intensity. In 'Farthing House', the tension is built up and released throughout the story as there are more diversions and other people to take the focus away from the main plot. This is good as it leaves time for the reader to think for themselves and have a break from the tension. Overall, I prefer 'Farthing House' as I can relate to it more, and it leaves me to dwell upon how young mothers and their babies were treated. ...read more.