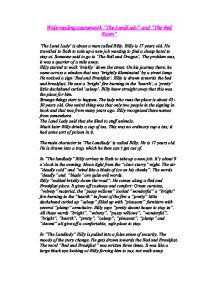 Wide reading coursework "The LandLady" and "The Red Room" 'The Land Lady' is about a man called Billy. Billy is 17 years old. He travelled to Bath to take up a new job wanting to find a cheap hotel to stay at. Someone said to go to 'The Bell and Dragon'. The problem was, it was a quarter of a mile away. Billy started to walk 'briskly' down the street. On his journey there, he came across a window that was 'brightly illuminated' by a street lamp. He noticed a sign 'Bed and Breakfast'. Billy is drawn towards the bed and breakfast. He saw a 'bright' fire burning in the 'hearth', a 'pretty' little dachshund curled 'asleep'. Billy knew straight away that this was the place for him. Strange things start to happen. The lady who runs the place is about 45-50 years old. One weird thing was that only two people in the signing in book and that was from many years ago. Billy recognised these names from somewhere. The Land Lady said that she liked to stuff animals. Much later Billy drinks a cup of tea. ...read more.

There were only two other entries. He started to read them. "Christopher Mulhdland from Cardiff" and the other was "Gregory W.Temple from Bristol". Suddenly "Christopher Mulhdland rang a bell". Billy "could feel her eyes resting on his face, watching him over the rim of her teacup". Billy noticed "she had a smell, white, quickly hands and had red finger nails". The strange bit the Landlady said, "there wasn't a blemish on his body. His skin was just like a baby's", talking about Mr Temple. How does she know this? Billy found out the parrot was stuffed, the Landlady had stuffed it herself. "Perfectly preserved" "I stuffed my little pets myself when they pass away". Billy's tea tasted like "bitter almonds" The' Red Room' is about a man who thinks there is no such thing as ghosts. He wants to prove this and decides to go to the 'Red Room' that's supposed to be haunted. He goes and the old woman and the old man couldn't believe that he was going to spend one whole night there. He sets down the corridor, up the spiral staircase, then down another corridor to the 'Red room'. ...read more.

The Landlady and The Red Room have only a few things in common. In the Landlady Billy Weaver was an innocent young 17 year old man who only wanted to get a better job and was trying to find 'The Bell and Dragon' for somewhere to stay the night. Billy came across a 'Bed and Breakfast' place. The owner, the old landlady, drew him to stay at 'The Bed and Breakfast'. Billy couldn't have thought anything bad was going to happen. But we know he was drawn into trouble. The man in 'the red rooms' thoughts is very shallow at the beginning of the story. When the old man tells him not to go in the room, he judges him as foolish for believing that there is a ghost inside. The man was hunting/seeking for trouble. He wanted to prove a point there was no such thing as ghosts. To prove this he went into 'The Red room' on his own mind and was haunted, not by ghosts but by fear of being in pitch darkness. The man first started off as a non-believer in ghosts, but when he came out he felled into the trap. There was something to believe in, not ghosts however, but fear. ...read more.