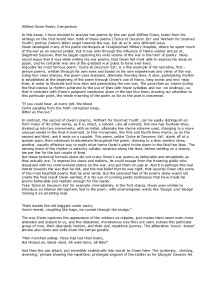 Wilfred Owen Poetry Comparison In this essay, I have decided to analyse two poems by the war poet Wilfred Owen, taken from his writings on the First World War. Both of these poems ('Dulce et Decorum Est' and 'Anthem for Doomed Youth') portray Owen's bitter angst towards the war, but do so in very different ways. Owen developed many of his poetic techniques at Craiglockhart Military Hospital, where he spent much of the war as an injured soldier, but it was only through the influence of fellow soldier and poet, Siegrfried Sassoon, that he began capturing his vivid visions of the war in the form of poetry. Many would argue that it was while writing his war poems, that Owen felt most able to express his ideas on paper, and he certainly was one of the greatest war poets to have ever lived. Arguably his most famous poem, 'Dulce et Decorum Est', is a fine example of his narrative, first-person poems, written through his own eyes and based on his own experiences and views of the war. Using four clear stanzas, the poem uses standard, alternate rhyming lines. A slow, painstaking rhythm is established at the beginning of the poem through Owen's use of heavy, long words and end-stop lines, in order to illustrate just how slow and painstaking the war was. ...read more.

Although by this stage, his views on religion may well have changed, his views on the ruthless murdering taking place in the fields were clearly very strong still. The very title 'Anthem for Doomed Youth,' with anthems usually being associated with love and passion, is very deliberately ironic, a way Owen shows how ridiculous he really thought the war was. The fact that the 'cattle' he speaks of aren't actually getting proper burials, just horrific mass burials, if any, just shows how Owen's irony in giving them their only real burial, only highlights the huge, and, in Owen's opinion, crazy sacrifice that the soldiers gave. But why did Owen write both of these poems? Some argue that all of Owen's war poems are extremely opinionated, and even, in extreme cases, of a propagandist nature, but most people agree that although Owen's poetry was very opinionated, he was just expressing his views, and showing those at home what the war was actually like. For much of Owen's work was not published until after the war, and indeed his death, so the only rewards Owen could possibly gain were to satisfy his own need to clear his mind of the horrors he had witnessed on the battlefield. ...read more.

Although this creates less imagery in the poem, we can still visualise the scenes captured in the poem by imagining the sounds Owen describes at great length. "The shrill, demented choirs of wailing shells; And bugles calling for them from sad shires." Both pieces offer a conclusion to the poems, a final moral to the story if you like. In 'Anthem for Doomed Youth', Owen drags the sonnet to a close, almost trailing off, but not, for the words are too important and too full of meaning for any reader to scan over. The funeral is over, and the rhetorical question that the poet asked at the beginning of the final stanza has been answered, and the noise has vanished. All is now quiet. "And each slow dusk a drawing-down of blinds." The long, heavy, alliterative 'd' sounds really do drag the ending on, and draw the poem to a deliberate close. So these two poems of Wilfred Owen are not completely contrasting, but are very different in many ways, and even if those differences are extremely subtle, without them the poems would never be able to fulfil their purpose. Whether it be to argue a case, or simply to enlighten the reader, neither would be possible without Owen's extensive knowledge and use of various poetical techniques and the context that he puts them in. ...read more.

This essay makes a good attempt at comparing the poems throughout the response - considering the elements of language, structure and form and how they are used to create certain effects. At times the expression could be more concise and formal.