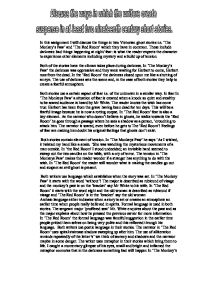 will discuss the things in two Victorian ghost stories i.e. 'The Monkey's Paw' and 'The Red Room' which they have in common

In this assignment I will discuss the things in two Victorian ghost stories i.e. 'The Monkey's Paw' and 'The Red Room' which they have in common. These include darkness: bad things happening at night/ fear: is what the reader expects the character to experience other elements including mystery and a build up of tension. Both of the stories have the climax takes place during darkness. In 'The Monkey's Paw' the darkness was oppressive and they were waiting for Herbert to come, Herbert rose from the dead. In the 'Red Room' the darkness closed upon me like a shutting of an eye. The use of darkness sets the scene and, in the case of both stories they help to create a fearful atmosphere. Both stories use a certain aspect of fear i.e. of the unknown in a similar way. In fear In 'The Monkeys Paw' a situation of fear is created when a knock so quiet and stealthy to be scared audience is heard by Mr White. ...read more.

Formal language is used in both stories. The sergeant major 'proffered seat' Mr. White enquires about the paw and as the major explains about how he pressed the previous owner for more information. In 'The Red Room' the formal language was fanciful suggestion in the earlier time people prided them selves on being very polite and this reflected through his language. Both writers use poetic language in their stories. The narrator in 'The Red Room' uses spiral staircase shadow sweeping up after him. The use of alliteration reminds repeatedly of the letter 's' we think of secrecy and shadows and the narrator maybe in some danger. The writer uses metaphor in their stories which bring them to life. I caught a momentary glimpse of his eyes, small and bright and inflamed the metaphor connotes that in the darkness something bad will happen In 'The Monkey's Paw'! As the old man takes 'The Monkey's Paw' to grant the second wish he caught his breath. ...read more.

A reader enjoys an unexpected event in the story. As well as enjoyment, the reader will also want to read on. 'Horror' is a stereotypical element at any ghost story, particularly the Victorian ghost story. In 'The Monkeys Paw' horror is when Herbert's employee comes to the house and tells Mr and Mrs White that their son is dead in a horrific accident with one of the machines. The other horror is when the mother wishes that her son is back alive even though he is mutilated. In 'The Red Room' the horror is when the narrator is crashing about the room, he says 'I struck myself against some other bulky furniture, I have a vague memory of battering myself thus, to and fro in the darkness, of a cramped struggle, and of my own wild crying as I darted to and fro, of a heavy blow at last upon my forehead. Horror is an element, a reader expects in a ghost story. It is thrilling and exciting; it will also frighten a reader. ...read more.