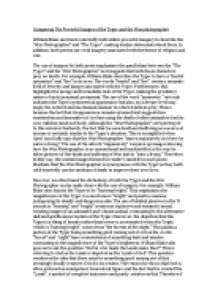 William Blake and Carol Ann Duffy both utilize powerful imagery to describe the War Photographer and The Tyger&quot;.

Transfer-Encoding: chunked ﻿Comparing The Powerful Images of the Tyger and the War photographer William Blake and Carol Ann Duffy both utilize powerful imagery to describe the ?War Photographer? and ?The Tyger?, making similar statements about them. In addition, both poems use vivid imagery associated with the theme of religion and war. The use of imagery by both poets emphasizes the parallelism between the ?The Tyger? and the ?War Photographer? as it suggests that both these characters prey on death. For example, William Blake describes the Tyger to have a ?fearful symmetry? and ?fire? in its eyes. The words ?fearful? and ?fire?, create a semantic field of ferocity and danger associated with the Tyger. Furthermore, this highlights the savage and formidable side of the Tyger, making the predatory nature of such an animal prominent. The use of the word ?symmetry ? not only indicates the Tiger?s symmetrical appearance but also, on a deeper level may imply the ordered and mechanical manner in which it kills its prey. This is because the fact that its appearance remains symmetrical suggests how emotionless and insensitive it is when using the death of other animals to fuel its own ruthless mind and body. Although the ?War Photographer? isn?t portrayed to this extent of barbarity, the fact that he uses death and suffering as a source of income is certainly similar to the Tyger?s situation. ...read more.

This produces a contrasting image on the War Photographer as it suggests he is doing something right and ?what someone must? as making people aware of the death and suffering in the world, is a step closer to resolving this problem of war. Furthermore, powerful imagery used by both C. A. Duffy and William Blake, emphasizes the duality of the Tyger and War Photographer. On the surface, both the Tyger and the War photographer seem to be emotionless and insensitive in the way they prey on death but the larger, meaningful purpose of each character is also portrayed. Powerful imagery is also presented in both poems via the theme of religion. For example, in War Photographer, strong religious imagery is created with use of the Bible quote ?All flesh is grass.? This implies that all life is as temporary as grass and just like grass life will shine for its season but then wither, fade and die. Alternatively the ?flesh? could be a metaphor for death, suggesting that death in war is as common and in huge numbers as blades of grass. Nevertheless, both these interpretations highlight the ephemeral nature of life in war. Perhaps Carol Ann Duffy uses the fact that quote stems from the Bible to almost blame Christianity or religion for allowing or creating War, which makes life so fragile and transient. ...read more.

Furthermore this imagery is quite because it questions whether the reader (of this poem) deep inside, have this same indifference to the pictures of War, many readers would relate to the way they are often dismissive of these images (like the readers in the poem), making them almost feel guilty. However the visualization in the Tyger creates very different effects on the reader. The lexical patterning of the words ?immortal?, ?distant?, ?wings? and ?heaven? creates a strong impression that the only 2 figures in this poem (The Tyger and its creator) are superhuman and celestial, creating a very mystical tone to the poem. This is reinforced with auditory imagery through the incessant trochaic metre of the poem and the repetition of the word Tyger, very much chant or hymn like, re-iterating the supernatural theme to the poem as hymns are sung to emphasise the magnificence of God. Therefore, this leaves the reader is awe and amazement of the power of these 2 figures that belong to a world much beyond the one of a human. Thus, the imagery in the Tyger and the War photographer also has very different effects on the reader, one leaving you with emotions of empathy and guilt and the other with a sense of wonder. In conclusion, Carol Ann Duffy and William Blake both present powerful images of the figures of the War Photographer and the Tyger that make them very alike. However the War photog ...read more.