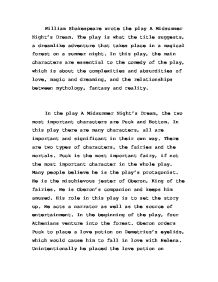 William Shakespeare wrote the play A Midsummer Night's Dream. The play is what the title suggests, a dreamlike adventure that takes place in a magical forest on a summer night. In this play, the main characters are essential to the comedy of the play, which is about the complexities and absurdities of love, magic and dreaming, and the relationships between mythology, fantasy and reality. In the play A Midsummer Night's Dream, the two most important characters are Puck and Bottom. In this play there are many characters, all are important and significant in their own way. There are two types of characters, the fairies and the mortals. Puck is the most important fairy, if not the most important character in the whole play. Many people believe he is the play's protagonist. He is the mischievous jester of Oberon, King of the fairies. He is Oberon's companion and keeps him amused. His role in this play is to set the story up. He acts a narrator as well as the source of entertainment. In the beginning of the play, four Athenians venture into the forest. ...read more.

All of the trials and tribulations in this play are the outcome of love's mishaps. The four Athenians, who spend the night in the forest, are having problems with love even before the fall victim to Puck's ignorance. Hermia and Lysander are in love and wish to be married. Hermia's best friend, Helena, is in love with Demetrius. But he wants nothing to do with Helena because he is in love with Hermia. The four Athenians end up the forest and as a result of Puck's mistake, both men fall in love with Helena. Love's difficulty also shows in Oberon and Titania's relationship. Oberon's desire for the Indian boy is stronger than his love for Titania, and he places the love potion on her eyelids as a joke as well as some kind of revenge. As a result of Oberon's prank, Titania falls in love with Bottom, a mortal with the head of an ass. Magic and dreaming is a major theme in this play. The fairies' magic is what allows all of these funny and peculiar situations to arise. Magic is used to create a dreamlike world that shifts the balance of everything. ...read more.

They have two sons together. Phaedra is completely in love with her stepson Hippolytus, but he refuses her. Denied by her stepson, her love for him was made public, and ashamed that she was in love with her own stepson she hung herself. Before dying she wrote a letter for Theseus and tied to her wrist. It said that Hippolytus had assaulted her. Enraged by what he read, Theseus exiled Hippolytus, not listening to any of his pleas. After exiling his firstborn son, he prayed to his ancestor Poseidon, King of the Sea, to do justice to his deceased wife. Leaving the boundaries of his father's land, Hippolytus and his carriage were knocked against the rocky shores by a gigantic wave. In the end Theseus loses two wives and his firstborn son. The story of Theseus and Hippolyta was a very tragic one. After reading the myth, it is evident Oberon's wishes don't come true for all of the lovers. According to the myth, the central couple in this play doesn't spend their lives together, and Theseus is left with nothing but heartache. With the main couple cursed, Oberon's wishes for all three couples to live happily ever after are not true. The fate of the other two couples is up to you. ...read more.