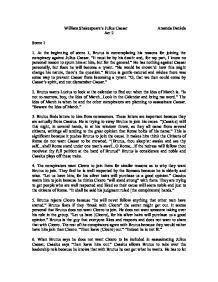 William Shakespeare's Julius Caesar Amanda Daniels Act 2 Scene 1 1. At the beginning of scene 1, Brutus is contemplating his reasons for joining the conspiracy against Julius Caesar. "It must be by his death: and, for my part, I know no personal reason to spurn him at him, but for the general." He has nothing against Caesar personally, but fears he will become a tyrant. "He would be crown'd: how this might change his nature, there's the question." Brutus is gentle-natured and wishes there was some way to prevent Caesar from becoming a tyrant. "O, that we then could come by Caesar's spirit, and not dismember Caesar." 2. Brutus wants Lucius to look at the calendar to find out when the Ides of March is. "Is not to-morrow, boy, the Ides of March...Look in the Calendar and bring me word." The Ides of March is when he and the other conspirators are planning to assassinate Caesar. "Beware the Ides of March." 3. Brutus finds letters to him from commoners. These letters are important because they are actually from Cassius. He is trying to sway Brutus to join his cause. "[Cassius] will this night, in several hands, in at his window throw, as they all came from several citizens, writings all tending to the great opinion that Rome holds of his name." This is significant because it pushes Brutus to join the cause. It makes him think the Citizens of Rome do not want Caesar to be crowned. "[Brutus, thou sleep'st: awake and see thy self...shall Rome stand under one man's awe?...O Rome...if the redress will follow thou receivest thy full petition at the hand of Brutus!" Brutus is considerate and noble and Cassius plays off these traits. 4. The conspirators want Cicero to join them for similar reasons as to why they want Brutus to join. They feel he is well respected by the Romans because he is elderly and wise. ...read more.

3. Decius convinces Caesar to go to the Capitol by telling him falsehoods that appeal to his vanity. He flatters Caesar and makes it look like Calpurnia's dream was a good omen. "This dream is all amiss interpreted; it was a vision far and fortunate." Decius also makes him think that if he does not go today, he might not be offered a crown. "The senate have concluded to give this day a crown to mighty Caesar. If you shall send them word you shall not come, their minds may change." Decius' final move it to call Caesar a wimp, which Caesar will not stand for. "If Caesar hide himself, shall they not whisper, 'Lo, Caesar is afraid'?" Caesar does not want to tarnish his reputation and agrees to go to the Capitol. Overall it is Decius' cleverness and Caesar's ego that make Decius' plan work. 4. Like many times before, in this scene Caesar appears superstitious. "Go bid the priests do present the sacrifice and bring me their opinions of success." Later in the scene when the servant he sent on this errand returns, Caesar ignores the warning. "They would not have [Caesar] stir forth to-day." Caesar has been warned three times of what is to come. First, when the soothsayer says, "beware the Ides of March." Calpurnia told him of her nightmares and begged him not to go. "Do not go forth to-day: call it my fear." The third warning was from the augurers who would not have Caesar "stir forth to-day." Caesar's excess of hubris is his downfall. It makes him believe that nothing bad can happen to him which is why he chooses to ignore the warnings. 5. Caesar prides himself on being constant and resolute. The audience knows this because when Calpurnia says "You shall not stir out of your house to-day," he says "Caesar shall forth." He is extremely concerned about his vanity. ...read more.

"Touch Calpurnia; for our elders say, the barren, touched in this holy chase, shake off their sterile curse." "Thrice hath Calpurnia in her sleep cried out, 'Help, ho! They murder Caesar'!" Nevertheless, they both have the same concern for their husband's safety, which indicates sincere love. 2. "Cowards die many times before their deaths." Here, Caesar is trying to convince Calpurnia that it is safe for him to go to the Capitol. He means that those who do not take risks never really live. He is saying that he is brave and can manage going to the Capitol. He does not want fear to run his life. This is dramatic irony because he is going to die if he is brave and ventures out of the house. The rest of the speech is full of dramatic irony as well. The audience is aware that Caesar will be "put to silence" shortly, be he does not. "It seems to me most strange that men should fear; seeing that death, a necessary end, will come when it will come." 3. Caesar being friendly to those who are about to assassinate him makes for good drama. This particular part of the scene shows Caesar playing the role of host. "Tastes some wine with [Caesar]." The audience gets to see another side of him. It is important for Shakespeare to reveal as much about Caesar as possible before he is put to silence. It is interesting that Caesar would refer to the conspirators as "good friends." It shows that he is clueless as to what will shortly "chance." Another thing Shakespeare does is have Trebonius and Brutus change around what Caesar has said in asides. Caesar says "Be near me, that I may remember you." In an aside, Trebonius says "So near will [Trebonius] be, that [Caesar's] best friends shall wish [Trebonius] had been further." Then Caesar says "Good friends, go in, and taste some wine with [Caesar}; and we, like friends, will straightway go together." In an aside, Brutus says "That every like is not the same, O Caesar." ...read more.