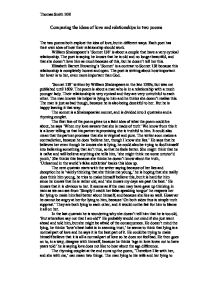 Comparing the ideas of love and relationships in two poems The two poems both explore the idea of love, but in different ways. Each poet has their own idea of how their relationship should work. William Shakespeare's 'Sonnet 138' is about a couple that have a very cynical relationship. The poet is saying he knows that he is old and no longer beautiful, and that she doesn't love him as much because of this, but he doesn't tell her this. Elizabeth Barrett Browning's 'Sonnet' is a contrast to Sonnet 138 because this relationship is completely honest and open. The poet is writing about how important her lover is to her, even more important than God. 'Sonnet 138' written by William Shakespeare in the late 1590s, but was not published until 1609. The poem is about a man who is in a relationship with a much younger lady. Their relationship is very cynical and they are very untruthful to each other. The man knows his helper is lying to him and he thinks she doesn't realise this. The man is just as bad though, because he is also being deceitful to her. But he is happy leaving it that way. ...read more.

The last line, 'And in our faults by lies we flatter'd be' means that he is happy with the fact that they are both lying to each other, because it still makes him feel happy. 'Sonnet' by Elizabeth Barrett Browning is very different to Shakespeare's 'Sonnet 138' in the way that it is about a relationship based on pure everlasting love and trust, rather than dishonesty and lying to each other. Her love for her husband is so great that she compares it with her love for God, or maybe she sees him as God. She says that she loves him as much as possible, and her love for him will last forever. This is very unlike Sonnet 138 because in that it is about false love and deceptions. The poet was handicapped as a child, due to a horse riding accident; this made people think that she would be a failure, therefore being able to achieve nothing special in her life. This may have affected her, so maybe she wanted to prove them wrong. She may have started writing because of this. Then in 1845 she met and fell deeply in love with. Robert Browning, who she later married and ran away to Italy with. ...read more.

She might also see her husband as a god. This poem is a big contrast to Sonnet 138 because the poet is exploring the idea of the lovers being in an honest relationship and their love is true and everlasting. Whereas in Sonnet 138 the poet has explored the idea of a relationship being based on lies and the lovers are not really sure if their love is true love. From analyzing and comparing these two poems, contrasts and similarities can be made. The main similarity is that the two poems are about love within a relationship. The main contrast is that Sonnet is about positive feelings towards the partner and Sonnet 138 is about negative feelings towards the partner. Sonnet uses positive language like 'purely,' 'freely,' and 'passion' which show feelings and emotions of pure love, and religious imagery is used, like 'soul,' 'Grace,' 'candlelight,' and 'praise' which emphasizes the feeling of love by comparing it with her love for her religion and God. Sonnet 138 on the other hand uses language that shows negative feelings, like 'lies,' 'false,' 'unjust,' and 'untutor'd.' All these words show negative feelings, giving the whole poem a dark feeling to it. To summarize, Sonnet is a positive poem focusing on the positive side of love, and Sonnet 138 is a negative poem focusing on the negative side of love. Thomas Smith 10E ...read more.