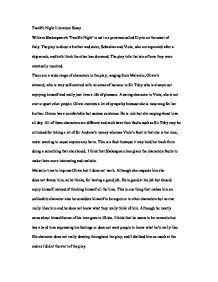 Twelfth Night Literature Essay William Shakespeare's 'Twelfth Night' is set in a province called Illyria on the coast of Italy. The play is about a brother and sister, Sebastian and Viola, who are separated after a shipwreck, and both think the other has drowned. The play tells the tale of how they were eventually reunited. There are a wide range of characters in the play; ranging from Malvolio, Olivia's steward, who is very self-centred with no sense of humour to Sir Toby who is always out enjoying himself and really just lives a life of pleasure. A caring character is Viola; she is not one to upset other people. Olivia receives a lot of sympathy because she is mourning for her brother. Orsino has a comfortable but useless existence. He is rich but sits moping about love all day. All of these characters are different and each have their faults such as Sir Toby may be criticised for taking a lot of Sir Andrew's money whereas Viola's fault is that she is too nice, never wanting to cause anyone any harm. ...read more.

Sir Toby is a likeable character because he does not care what anyone thinks of him, if they do not like him, they will just have to put up with it. People think he should be a respectable gentleman and act his age but he finds acting like everyone else stuffy and claustrophobic. Sir Toby is certainly not a model gentleman but when he drinks his behaviour is even worse. He does not have a lot of money. He may have had more but living a life of pleasure has changed that. He is criticised for living a life of pleasure but at least, unlike some other characters, he is genuine, he does not try to be anything he is not, and this is one of the reasons why Maria loves him. Although Sir Toby is a likeable Character his practical jokes do tend to get tiresome as the play wears on. Olivia, Sir Toby's niece, is not like him at all. She is a well off countess who is respectable and acts the way she should. ...read more.

Duke Orsino does not seem to have much character or personality. He seems not to do very much, he has an almost useless existence; he just sits about moping about love. He is rich and has a comfortable existence with lots of servants. He seems young and immature, and does not have the same wisdom or knowledge as Viola and Sir Toby do. He is not an imposing figure, but it is possible that there is more to him than meets the eye. Orsino has tried with Maria but has not succeeded because she is in love with Sir Toby. It is too hard to form an opinion of him because he isn't a very noticeable character. I think that Viola emerges with credit at the end of the play because her only fault is that she is too nice so she could not be criticised for anything. Two characters who I think come out of the play badly are Sir Toby and Malvolio. Both of these characters can be annoying at times, and although Toby may have started off well he does end up quite boring, whereas Malvolio, on the other hand, was never a likeable character. ...read more.