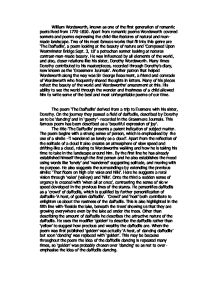 William Wordsworth, known as one of the first generation of romantic poets lived from 1770-1850.

William Wordsworth, known as one of the first generation of romantic poets lived from 1770-1850. Apart from romantic poems Wordsworth covered sonnets and poems expressing the child-like features of natural and man-made landscape. Two of his most famous works that fit into this genre are 'The Daffodils', a poem looking at the beauty of nature and 'Composed Upon Westminster Bridge Sept. 3, 18' a petrachan sonnet looking at natures contrast-man-made beauty. He was influenced by all elements of the world, and also, closer relations like his sister, Dorothy Wordsworth. Many times Dorothy contributed to his masterpieces, recorded through Dorothy's diary, now known as the 'Grassmere Journals'. Another patron that helped Wordsworth along the way was Sir George Beaumont, a friend and comrade of Wordsworth who frequently shared thoughts in letters. Many of his pieces reflect the beauty of the world and Wordsworths' amazement at this. His ability to see the world through the wonder and freshness of a child allowed him to write some of the best and most unforgettable poems of our time. The poem 'The Daffodils' derived from a trip to Eusmere with his sister, Dorothy. On the journey they passed a field of daffodils, described by Dorothy as to be 'dancing' and in 'gayety'- recorded in the Grassmere Journals. This famous poem has been described as a 'beautiful expression of joy'. The title-'The Daffodils' presents a patent indication of subject matter. The poem begins with a strong sense of person, which is emphasised by the use of a simile -'I wandered as lonely as a cloud'. Apart from the reflection of the solitude of a cloud it also creates an atmosphere of slow speed and drifting-like a cloud, relating to Wordsworths walking and how he is taking his time to take in the landscape around him. By the first line he has already established himself through the first person and he also establishes the mood using words like 'lonely' and 'wandered' suggesting solitude, and moving with no purpose. ...read more.

Wordsworth was said to have contributed these lines to this poem. It begins with a visual onomatopoeia-'flash', which also concludes a lexical field created throughout the poem-'twinkle', 'sparkling' and 'flash' which all create the visual alternative of an onomatopoeia. Further on in this line Wordsworth uses the metaphor 'inward eye' which is a metaphorical term for your imagination or memory, as he is now recalling on his 'inward eye' to remember the happiness the daffodils brought to him. We can tell how happy he from this memory as Wrodsworth uses synonyms happiness in this stanza: 'bliss', 'pleasure', reinforces his feelings gained from the daffodils. He also uses the repetition of the daffodils making him happy when he is in a solitary mood, as on the day he first sees the daffodils he is in a solitary mood, and a solitary mood is suggested in the fourth stanza when he uses the phrase 'bliss of solitude'. This oxy-moron, also emphasises that he is happy ('bliss') even though he may be feeling lonely. This point is again stressed in the penultimate line when Wrodsworth uses the phrase 'pleasure fills', contrasting with 'vacant' suggesting how much pleasure the memory of the daffodils have brought to him as now he is now full of pleasure as once he was 'vacant' and now his 'heart with pleasure fills'. The poem is concluded with repetition of the daffodils dancing- 'And dances with the daffodils'. This line creates alliteration with 'dances' and 'daffodils' and even the 'dills' in 'daffodils' through a strong iambic rhythm, emphasising the alliterate words. This final stanza creates the sentiment of Wordsworth now feeling full of happiness. In conclusion I believe that this is a very beautifully written, expression of joy and the joy the daffodils bring to Wordsworth. I believe that this poem inspired future poets and the general public to notice what's surrounding them. But it is also correct to say that Wordsworth is just another poet set on the bookshelf of inspiration, as there were many poets before who undertook the appreciation of nature and daffodils themselves. ...read more.

This is followed by 'calm so deep'; suggesting the tranquillity of the city, and the use of an intensifier stresses the idea of tranquillity. Wordsworth also uses an emphatic exclamation mark, which adds to the atmosphere, showing his strong feelings. The sestet seems a lot more emphatic than the octave through the usage of intensifiers, exclamation marks and the repetition of the adverb 'Never' through which he is expressing his own opinions and feelings. The fourth line of the sestet begins with the personification of the River Thames with 'The river glideth at his own sweet will', referring to the Thames as a person. In this line Wordsworth also develops this on-going lexical field of beauty with the modifier-'sweet'. There is also another lexical field qualified in this line, words suggesting leisurely movement-'glideth, steep, calm' and 'deep' all add to the tranquil atmosphere of the city at dawn. The verb 'glideth' represents the slow movement of the river and again adds to the tranquillity of the city. From this you can detect Wordsworth's surprise in seeing such a, normally busy city, so serene and motionless. In the penultimate line of the sestet and of the whole sonnet, Wordsworth links his experience and feelings of the beautifully calm city to religious and spiritual feelings as he addresses his thoughts to God-'Dear God!'. Wordsworth follows this by personifying the houses as asleep-'the very houses seem asleep'. The concluding line of 'Composed Upon Westminster Bridge'- 'And all that mighty heart is lying still!' we are reminded of the 'majesty' of London with the modifier 'mighty'. There is also an extension of the personification of the city as a royal person as Wordsworth provides it with a 'mighty heart'. The 'heart' is a vital organ, placed in the centre of the human body, just as a capital city is essential to the life of a country-London is essential to the life of the United Kingdom. ...read more.

The title is a little misleading – it perhaps should have been “Explicate upon two poems of Wordsworth”. The entire essay has no real direction, but is an extremely detailed commentary on “The Daffodils” and “Westminster Bridge”. Although this makes ...

The title is a little misleading – it perhaps should have been “Explicate upon two poems of Wordsworth”. The entire essay has no real direction, but is an extremely detailed commentary on “The Daffodils” and “Westminster Bridge”. Although this makes for an extremely in depth essay, it could have benefited from some form of focus, such as a theme, or narrative structure, or form.

There is truly excellent analysis in this essay. The writer goes into great detail about form, structure, and language, considering imagery and other features of the poems. In particular the writer fully analyses specific words rather than taking a whole line and extrapolating. This is good as it shows an attention to detail and an ability to consider both the minutiae of phrases and how they make up the poem as a whole. Each point is explained thoroughly: for instance, “The opening lines of the sonnet are very emphatic, created by the iambic pentameter...”. The writer takes a chunk, the opening lines, makes an assertion (“very emphatic”), and provides evidence which supports this point (“created by the iambic pentameter”). Evidence can come in the form of quotes or structure (it is hard to quote form, as it usually takes up a whole line). Therefore the writer not only gives detailed analysis, but displays an understanding of how essays can be written.

However, this analysis rarely extends to evaluation. The writer does not consider how likely interpretations are or which is most important in adding to the general atmosphere of each poem. This adds to the sense of the essay being a calculating commentary without the writer fully engaging with the text. To an extent there should be an indication of personal response – although it is unwise to write in the first person, this can come through by suggesting how different readers would understand different quotes, or by concluding “to what extent” the author does something. This can be throughout, and not only in a conclusion. In this case, the conclusion is just one more point. To 'wrap up' the essay and give a sense of completion, one could take a point which sums up the writer's main argument about the essay and incorporate other points into it (making it better than just a summary of points). This is where the writer's lack of a focal question most impedes the quality of the essay.

Technical terms are used excellently, far exceeding expectations for a GCSE level piece of work. Knowledge of the Petrarchan sonnet (although “Petrarchan” is spelt wrong in the essay) shows that the writer has a clear metrical understanding and this is used to great effect in the analysis. Spelling, grammar and punctuation are used well, all of which make the essay flow and gives an overall impression of a well thought-out, high standard essay.