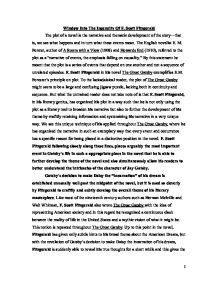 Window into the ingenuity of F. Scott Fitzgerald.

Window Into The Ingenuity Of F. Scott Fitzgerald The plot of a novel is the narrative and thematic development of the story-that is, we see what happens and in turn what these events mean. The English novelist E. M. Forster, author of A Room with a View (1908) and Howards End (1910), referred to the plot as a "narrative of events, the emphasis falling on causality." By this statement he meant that the plot is a series of events that depend on one another and not a sequence of unrelated episodes. F. Scott Fitzgerald in his novel The Great Gatsby exemplifies E.M. Forester's principle on plot. To the lackadaisical reader, the plot of The Great Gatsby might seem to be a large and confusing jigsaw puzzle, lacking both in continuity and sequence. But what the untrained reader does not take note of is that F. Scott Fitzgerald, in his literary genius, has organized his plot in a way such that he is not only using the plot as a literary tool to broaden his narrative but also to further the development of his theme by craftily retaining information and systemizing his narrative in a very unique way. ...read more.

For this Fitzgerald uses Daisy to represent the deepest seductive powers of the American Dream as well as its greatest dangers. Gatsby made Daisy the "incarnation" (117) of his dream "five years before" (117) the current chronology of the story and from that point, Gatsby has humanized an abstract idea of society and has made his conquest of it his sole priority in life. But instead of placing this flashback earlier on in the narrative where it would have allowed the reader to better understand the events of the novel, Fitzgerald dramatically chose to situate the flashback after he lets us know that, "Daisy tumbled short of his [Gatsby's] dreams-not through her own fault but because of the colossal vitality of his illusion." (101). Fitzgerald does this intentionally to show that even though pursuing the dream-or the woman, ultimately led to Gatsby's untimely death, and whatever the outcome - the undertaking was still worth the risk. To Fitzgerald this was necessary, as this pursuit was essential for the exceptional man who wished to fully realize his character. Fitzgerald shows this crucial flashback just as Gatsby's dream starts to unravel and his "incarnation" slowly moves past his grasp like an illusion drifting away in the wind. ...read more.

Fitzgerald interjects this scene into his literary masterpiece mainly to show the humanistic side of Gatsby. Daisy represents Gatsby's dream but she is also a representation of the need for Gatsby to find himself. His willingness to commit himself totally to his vision of a bright future makes his death tragic. Fitzgerald masterfully uses this scene and the position that he has it placed in, to show not only that Gatsby but also that the American society is in a transitional period. Behind Gatsby was a powerful force of optimism, vivacity and individualism but in order to try to attain the "incarnation" of his dream, he had to sacrifice everything including himself, so much so in the end he achieves nothing but instead is hit head over heels with failure! In Aspects of the Novel, the British novelist E.M Forester says, "Yes-oh dear, yes-the novel tells a story." Plot definitely is a crucial element in all works of fiction, and F. Scott Fitzgerald must be applauded for his exceptional use of it. Fitzgerald in The Great Gatsby is the potter, and the plot is his clay; he is able to mould it into any shape or form and allows it to represent many different aspects such as theme and characterization and eventually models it in such a way that he is able to create a masterpiece. 1 ...read more.