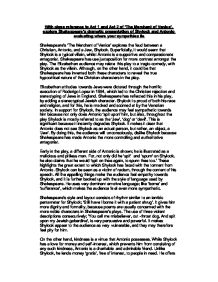 With close reference to Act 1 and Act 2 of 'The Merchant of Venice', explore Shakespeare's dramatic presentation of Shylock and Antonio evaluating where your sympathies lie Shakespeare's 'The Merchant of Venice' explores the feud between a Christian, Antonio, and a Jew, Shylock. Superficially, it would seem that Shylock is a typical villain, whilst Antonio is a supportive and compassionate antagonist. Shakespeare has use juxtaposition for more contrast amongst the play. The Elizabethan audience may relate this play to a tragic-comedy, with Shylock as the villain. Although, on the other hand, it could be that Shakespeare has invented both these characters to reveal the true hypocritical nature of the Christian characters in the play. Elizabethan attitudes towards Jews were dictated through the horrific execution of Roderigo Lopez in 1594, which led to the Christian rejection and stereotyping of Jews in England. Shakespeare has reflected this in his play, by adding a stereotypical Jewish character. Shylock is proud of both his race and religion, and for this, he is mocked and scorned at by the Venetian society. In support for Shylock, the audience may feel sympathetic towards him because not only does Antonio 'spit upon' him, but also, throughout the play Shylock is mostly referred to as the 'Jew', 'dog' or 'devil'. ...read more.

Shakespeare has clearly portrayed his stereotypical view of a Christian's social success, and a Jew's social failure. This may prove to the audience that Antonio is the more favourable one rather than Shylock, due to his admirable social achievements. A high opinion is held about Antonio and he has many loyal friends. When Bassanio asks Antonio for money to court Portia, although all his 'fortunes are at sea', he tells Bassanio to 'try what my credit can in Venice do'. The love he has for his friend is so great, that it prompts him to sign the bond with Shylock, which nearly causes his death. It shows that he is not selfish; he will sacrifice his life to make his friend happy. Thus the audience will feel sympathy for the good-natured Antonio. Lorenzo says that if Shylock, 'the Jew', ever enters 'heaven', it will be because of his 'gentle daughter's sake'. He is implying that Shylock's faith and his Jewish heritage is not strong enough to get him into heaven. If Jessica chooses Christianity over Judaism, it will save Shylock. The statement can be interpreted, as that Lorenzo believes that Christianity is the religion that is powerful enough to admit one into heaven. ...read more.

This statement by Shakespeare is quite racist as it suggests that Jews will contaminate Christians. As a result the audience would have Shylock's sympathy because he is being discriminated against, simply for his religion. Antonio has constantly 'rated' Shylock, but Shylock wonders, can a 'cur' 'lend three thousand ducats?', when Antonio requests that he lend ducats to him. Certainly, Shylock cannot be blamed for disliking Christians, especially Antonio, because he has received dreadful treatment from them for the most part of his life. Therefore, the audience will not only empathise with Shylock, but they may also think that Antonio is very proud and arrogant, merely for the reason that he is a Christian who thinks Jews are less superior. The issue of racism further complicates Shylock's character, although it earns a greater sympathy with the audience, of the 21st century. It shows that the Venetian Christians denied Shylock's humanity and the audience is reminded of the anti-Semitism of the Nazi's regime, which took place. Shylock is an example of the result of racial persecution. With this, he may win the audience's sympathy, but the action he takes with his hatred is just as dreadful as some of the tormenting Christian's. The audience is repulsed by Shylock's treatment towards his daughter, employee and his mercenary attitudes. Therefore, the more generous and loyal to his friends, Antonio wins my sympathy. ?? ?? ?? ?? ...read more.