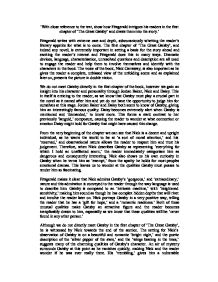 'With close reference to the text, show how Fitzgerald intrigues his readers in the first chapter of 'The Great Gatsby' and draws them into the story.'

'With close reference to the text, show how Fitzgerald intrigues his readers in the first chapter of 'The Great Gatsby' and draws them into the story.' Fitzgerald writes with extreme care and depth, subconsciously whetting the reader's literary appetite for what is to come. The first chapter of 'The Great Gatsby', and indeed any novel, is extremely important in setting a basis for the story ahead and exciting the reader's interest and Fitzgerald does this in many ways. Dramatic devices, language, characterisation, unresolved questions and description are all used to engage the reader and help them to involve themselves and identify with the characters in the book. The voice of the book, Nick Carraway, is also important as he gives the reader a complete, unbiased view of the unfolding scene and as explained later on, presents the picture in double vision. We do not meet Gatsby directly in the first chapter of the book, however we gain an insight into his character and personality through Jordan Baker, Nick and Daisy. This in itself is enticing to the reader, as we know that Gatsby must play a crucial part in the novel as it named after him and yet do not have the opportunity to judge him for ourselves at this stage. ...read more.

The setting for Nick's observation of Gatsby is on a beautiful and romantic 'bright night,' and the poetic description of the 'silver pepper of the stars,' and the 'wings beating in the trees,' suggests many of the charming qualities of Gatsby's character. An air of mystery surrounds Gatsby at this point as he vanishes quickly, making Nick and the reader wonder if he was ever really there. His 'trembling,' gives him a vulnerable atmosphere and the ethereal green light that he 'stretched his arms toward,' is intriguing and could also be symbolic of the envy that he feels of Tom. This touching portrayal draws the reader further into the story, just as Daisy did earlier in the chapter. Superficially, Tom and Daisy seem to represent the archetypal "American dream". They own a 'cheerful red-and-white Georgian Colonial mansion,' and form the perfect family unit of two 'enormously wealthy,' beautiful parents and an angelic little daughter. However, the reader soon comes to realise that beneath this fa�ade lies unhappiness and discontent. They are clearly dissatisfied, as they drift 'here and there unrestfully' and Nick feels that 'Tom would drift on forever seeking.' The question of what Tom is seeking is extremely enthralling to the reader, as it seems ludicrous that he is unhappy. ...read more.

Nick sees New York as the realisation of the "American dream" and believes he can fulfil his own dreams there. Fitzgerald manages to create a kind of double vision within the narration of Nick as he can see the insincerity and superficial nature of those around him but is also inexplicably drawn and captivated by the colours, glamour and money. This leads the reader to create their own double visioned curiosity of him, wondering whether he will realise his dream or be disillusioned by it all. This is fuelled by the way that Fitzgerald writes as Nick says that he 'had the intention of reading many more [books] besides,' immediately begging the question of what stopped him? The first chapter of 'The Great Gatsby,' is as beautifully crafted and well written as any introduction I have ever found. Fitzgerald masters the art of creating intrigue and fascination in the reader subtly and without force. An excellent example of this is his description of Daisy in which she appears so lovely and bright that nobody could fail to be attracted to her. Many issues are raised that will be discussed later in the book and all the while the elusive figure of Gatsby looms over the first chapter like the moon reflected in the water that divides him and Daisy. ...read more.