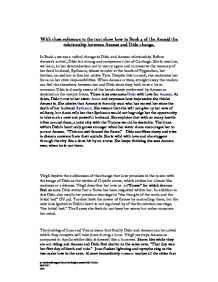 With close reference to the text show how in Book 4 of the Aeneid the relationship between Aeneas and Dido change.

With close reference to the text show how in Book 4 of the Aeneid the relationship between Aeneas and Dido change. In Book 4 we see a radical change in Dido and Aeneas relationship. Before Aeneas's arrival, Dido is a strong and competent ruler of Carthage. She is resolute, we learn, in her determination not to marry again and to preserve the memory of her dead husband, Sychaeus, whose murder at the hands of Pygmalion, her brother, caused her to flee her native Tyre. Despite this turmoil, she maintains her focus on her civic responsibilities. When Aeneas arrives, straight away the readers can feel the chemistry between her and Dido since they both have a lot in common. Dido is already aware of the heroic deeds preformed by Aeneas as depicted on the temple frieze. These tales overcome Dido with love for Aeneas. At dawn, Dido turns to her sister Anna and expresses how impressive she thinks Aeneas is. She admits that Aeneas is the only man who has moved her since the death of her husband Sychaeus. She swears that she will not give up her vow of celibacy, but Anna tells her that Sychaeus would not begrudge her the opportunity to take such a new and powerful husband. She explains that with so many hostile tribes around them, a joint city with the Trojans would be desirable. ...read more.

Yet, Aeneas silently dallies in Carthage with Dido "laying the foundations of a citadel and putting up buildings" wearing "a rich cloak given to him by Dido." However on the other hand Dido has began to lose the support of Carthage's citizens, who have seen their queen indulge an passionate obsession at the expense of her civic responsibilities. Further, by dallying with another foreigner, Dido alienates the local African chieftains who had approached her as suitors and now pose a military threat. Dido and Aeneas spend the winter together. They both rule the city of Carthage together. However Iarbas, a local chieftain and son of Jupiter, is enraged because Dido refused him when he asked her for marriage. He then pleads with Jupiter who is prompted to instruct Mercury to go and tell Aeneas to seek his real destiny. Mercury repeats Jupiter's order for Aeneas to go to Italy where he is fated to go. Aeneas waits for the right moment to tell her, but Rumour brings her the news and she goes into a frenzy. The essential character of her passion remains unchanged, however, as is demonstrated by Virgil's continued use of fire imagery. She walks the streets of Carthage "all aflame with rage." She tries to plead with him by saying that she is in danger with the native chieftains because she snubbed them. ...read more.

By the time Aeneas leaves she is not even willing to acknowledge his existence anymore as she speaks in past tense during his presence. Through Dido, Virgil affirms order, duty, and history at the expense of romantic love. Dido ends her life in a manner that reinforces the fire imagery Virgil has used. She asks Anna to gather all the possessions that Aeneas has left behind and prepare them for a ritual pyre. She then places herself at the top of the fire, stabs herself with Aeneas' sword, and dies amidst the flames. This sequence combines Virgil's metaphorical use of fire with a portrayal of a physical reality. Anna's role in the preparation and the use of Aeneas' sword as the instrument of Dido's death reflect the development of her love, passion and frenzy. The flames within her soul are reflected in the flames around her body. In conclusion, during Book 4 the relationship that develops between Aeneas and Dido end tragically for both. Aeneas has to leave his love and Dido is the victim of a tragic destiny. She is filled with passion, madness, and selfish thoughts; Aeneas is concerned with the memory of his fatherland and the future of his descendants. Dido is closely tied to Juno. Aeneas is tied to Jupiter. However Aeneas' experience with Dido enriches him and gives him a new commitment to his purpose. n:\mywork\classics\dido essay.doc 09/05/07 97aftab ...read more.