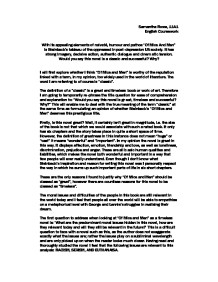 With its appealing elements of naivet, humour and pathos Of Mice And Men is Steinbeck's tableau of the oppressed in post-depression US society. It has strong imagery, decisive action, authentic dialogue and cinematic tension.

Samantha Rowe, 11A1 English Coursework With its appealing elements of naivet�, humour and pathos "Of Mice And Men" is Steinbeck's tableau of the oppressed in post-depression US society. It has strong imagery, decisive action, authentic dialogue and cinematic tension. Would you say this novel is a classic and successful? Why? I will first explore whether I think "Of Mice and Men" is worthy of the reputation linked with a term, in my opinion, too widely used in the world of literature. The word I am referring to of course is "classic". The definition of a "classic" is a great and timeless book or work of art. Therefore I am going to temporarily re-phrase the title question for ease of comprehension and explanation to: "Would you say this novel is great, timeless and successful? Why?" This will enable me to deal with the true meaning of the term "classic" at the same time as formulating an opinion of whether Steinbeck's "Of Mice and Men" deserves this prestigious title. Firstly, is this novel great? Well, it certainly isn't great in magnitude, i.e. the size of the book is not that which we would associate with such a rated book. It only has six chapters and the story takes place in quite a short space of time. However, the definition of greatness in this instance does not mean "huge" or "vast" it means "wonderful" and "important". In my opinion the novel is great in this way. It displays affection, emotion, friendship and love, as well as loneliness, discrimination, prejudice and anger. ...read more.

I have found various examples of sexist remarks throughout the book, all of which are made by the male ranch workers. Here is a quote from a conversation between George and Whit in chapter three: " George said, 'She's gonna make a mess. They's gonna be a bad mess about her. She's a jail-bait all set on the trigger. That Curley's got his work cut out for him. Ranch with a bunch of guys on it ain't no place for a girl, specially like her.'" There are many passages like this in "Of Mice and Men" which call Curley's wife a range of horrible names that she probably doesn't deserve. She isn't really as much of a "tart" as the men make out, she is just very lonely and wants to talk to somebody other than her husband for once. I think that the ranch workers are unfair towards Curley's wife, who quite aptly is not given a name in the novel. I don't know if Steinbeck meant for this to be an issue in the book, but it certainly would be classed as one today. Women have got the same rights as a man in the society I live in, and in some societies they still don't have the same rights. Gender equality is a burning issue in many religious groups which see the women as the property of a man and not a person in her own rights, I think that this makes the book controversial and understood differently by different readers. This controversy will make the book live on for as long as it is still a concern. ...read more.

I tell ya,' he cried, 'I tell ya a guy gets too lonely an' he gets sick.'" This makes me think about what it is like to be so lonely, it challenges me to realise that people are alone in the world and that things like that do really happen. I believe that it has this effect on every reader, and this is yet another reason for this novel to be deemed a classic. Everything about this book makes me think that it deserves the term "classic"; after all I have found reasons for it to be called great and many reasons for it to be called timeless. However, I realise that every reader will think differently about it and look at it on a different level, so I will conclude that "Of Mice and Men" is a classic as far as I am concerned. We still have one question unanswered, is "Of Mice and Men" successful? The answer to this question is quite simply: yes it was successful. It certainly brought Steinbeck recognition in the literature world (he gained the Alfred Nobel literature prize in 1962) and pupils in schools all over the world read it as part of Literature and English courses. It is in my opinion as successful as it is a classic and will always bring empathy and understanding to readers for a very long time to come. It is definitely in the top two of all of Steinbeck's novels (in some people's opinion second to "Grapes of Wrath"). It most definitely deserves all the praise it has received and will probably continue to receive, for its unique ability to reach into the soul and pull out the very best and the very worst in human nature. ...read more.