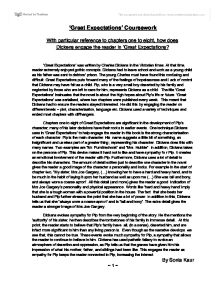 With particular reference to chapters one to eight, how does Dickens engage the reader in Great Expectations?

'Great Expectations' Coursework With particular reference to chapters one to eight, how does Dickens engage the reader in 'Great Expectations? 'Great Expectations' was written by Charles Dickens in the Victorian times. At that time, reader extremely enjoyed gothic concepts. Dickens had to leave school and work as a young child as his father was sent to debtors' prison. The young Charles must have found this confusing and difficult. Great Expectations puts forward many of the feelings of hopelessness and lack of control that Dickens may have felt as a child. Pip, who is a very small boy deserted by his family and neglected by those who are left to care for him, represents Dickens as a child. The title 'Great Expectations' insinuates that the novel is about the high hopes about Pip's life or future. 'Great Expectations' was serialised, where two chapters were published every week. This meant that Dickens had to ensure the readers stayed interested. He did this by engaging the reader on different levels - plot, characterisation, language etc. Dickens used a variety of techniques and ended most chapters with cliffhangers. Chapters one to eight of Great Expectations are significant in the development of Pip's character; many of his later decisions have their roots in earlier events. One technique Dickens uses in 'Great Expectations' to help engage the reader in this book is the strong characterisation of each character. Pip is the main character. His name suggests a little bit of something, an insignificant and useless part of a greater thing; representing his character. ...read more.

Furthermore, Pip draws 'self awareness by placing himself firmly in a dreary, bleak landscape that seems to go on forever. This is another gothic element as it is a gloomy, grotesque, and mysterious setting with an atmosphere of degeneration and decay; further emphasising the abandonment of the churchyard. The reader expects anticipation and the descriptions of abandonment and neglect - and the gothic elements add this. Dickens' descriptions are very detailed and they create the atmosphere of a gothic setting. In his time - the Victorian Age, gothic elements were incredibly popular. Alternatively, a technique that Dickens uses to help engage the reader is the structure and plot. He uses chapter endings, for example, the first chapter ends as it begun... Pip is a frightened little boy in a huge uncaring landscape, deserted by family and friends and tormented by strangers. We cannot help but care what happens to him and we are firmly sympathetic. Perhaps the young Dickens felt like this when his father was removed from the family to the debtors' prison. In addition, at the end of chapter two, "opened the door (...), and ran for the misty marshes". This is a cliffhanger because we do not want Pip to be caught stealing, as he takes the food to the convict. It is important that Dickens used cliffhangers to help engage the reader because, 'Great Expectations' was serialised and Dickens would have wanted to keep the readers constantly engaged so that as a result his story would sell. ...read more.