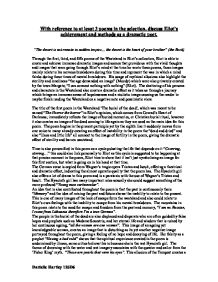 With reference to at least 3 poems in the selection, discuss Eliot's achievement and methods as a dramatic poet.

With reference to at least 3 poems in the selection, discuss Eliot's achievement and methods as a dramatic poet. "The desert is not remote in sudden tropics... the desert is the heart of your brother" (the Rock) Through the first, third, and fifth poems of the Wasteland in Eliot's collection, Eliot is able to create and achieve immense dramatic images and scenes that provide us with the vivid thoughts and images that were going through Eliot's mind at the time he wrote these poems, these images mainly relate to his nervous breakdown during this time and represent the was in which a mind thinks during these times of mental breakdown. His usage of mythical allusions also highlight the sterility and loneliness "the age demanded an image" (Moody) which were also privately created by the town Margate; "I can connect nothing with nothing" (Eliot). The shattering of his persona and characters in the Wasteland also create a dramatic effect as it takes us through a journey which brings an immense sense of hopelessness and a niulistic image causing us the reader to maybe finish reading the Wasteland on a negative note and pessimistic view. ...read more.

the city create images that cause us to see the city as an urban wasteland that has kittle importance to the real world. Eliot makes this first section of the poem very dramatic by using vivid yet quite disturbing imagery of city life "A rat crept softly through the vegetation dragging its slimy belly on the bank." The image of prostitution is also used in this poem creating the reader to see how the women actually feel once they have been on the job feeling abandoned and used by the men that they grow to be fond of after having sexual relations with them "Departed have left no addresses. By the waters of Leman I sat down and wept..." The imagery of the old and new river Thames are also an allusion to Wagner's 'Twilight of the God's' "Wallala, leilala" but also relater to the stories of Queen Elizabeth I and her lover Leicester, although this is not dramatic in the sense of shocking imagery etc. It is merely a mellow dramatic feature in this poem. The enjambment of the river flowing quickly shows that there is little time in the Wasteland again an image of no hope for the characters and the hypocritical reader who becomes a part of the poem. ...read more.

the thunder said are all examples of how Eliot is able to create such a huge feeling for the need to survive in the wasteland by using vivid and sometimes violent parataxis imagery. He achieves this by trying to get the reader involved with the poems. Without these three poems in the wasteland the drama that is created in this selection would not exist because they are the foundations of the whole journey through the mind of Eliot during his mental breakdown and also through the mind of the questor in the wasteland who is searching for a life of hope rather than a life of damnation and stasis. The critics Cedric Watts and Hugh Kenner both have this view on Eliot's ability to create such drama in his poems and it is clear that these three poems from the wasteland are the best examples of how to show the techniques in which Eliot uses to create such amazing works of poetry. The wasteland is about metamorphoses: healing transformations as well as grim breakdowns" (Watts) "The fidelity of things as they impinge upon the senses is not for him a way of immersing in experience: it is rather a way of mastering it in the mind" (Kenner) Danielle Hartley 12SD6 ...read more.