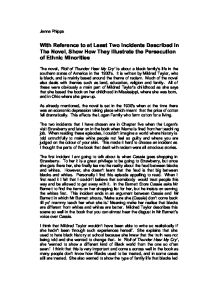 With Reference to at Least Two Incidents Described In The Novel, Show How They Illustrate the Persecution of Ethnic Minorities

Jenna Phipps With Reference to at Least Two Incidents Described In The Novel, Show How They Illustrate the Persecution of Ethnic Minorities The novel, 'Roll of Thunder Hear My Cry' is about a black family's life in the southern states of America in the 1930's. It is written by Mildred Taylor, who is black, and is mainly based around the theme of racism. Much of the novel also deals with themes such as land, education, religion and family. All of these were obviously a main part of Mildred Taylor's childhood as she says that she based the book on her childhood in Mississippi, where she was born, and in Ohio where she grew up. As already mentioned, the novel is set in the 1930's when at the time there was an economic depression taking place which meant that the price of cotton fell dramatically. This affects the Logan Family who farm cotton for a living. The two incidents that I have chosen are in Chapter five when the Logan's visit Strawberry and later on in the book when Mama is fired from her teaching job. When reading these episodes, I couldn't imagine a world where history is told untruthfully to make white people not feel so guilty and where you are judged on the colour of your skin. ...read more.

This shows us that she feels the same way as Cassie does in that she thinks that blacks are treated unfairly, but she thinks that we just have to get on with it. From this and throughout the whole book we can see that Mama is a very caring woman, but she does believe that people should take things as they come and get on with their lives, even if it means having to live with the violence and hatred towards the blacks from the whites. The second incident that I am going to write about is in chapter eight where Mama is fired from her job as a teacher. In this episode, Mama is giving a lesson about slavery when Mr Wallace and Mr Granger walk in and say that they, 'Been hearing 'bout your teaching, Mary, so as members of the board we thought we'd come by and learn something.' When they walk in Mama is teaching a lesson in history. The unlucky thing is that she is teaching the history of slavery. She speaks about how cruel slavery is and how the country profited from the slaves who were paid nothing and still not free. Then Mr Granger sees the books that Mama has pasted over and acknowledges that all the things Mama is teaching are not in the books. ...read more.

The North won and finally put an end to the slavery trade in the Southern states. At this time large numbers of blacks left the South and headed for the North knowing that there was not as much poverty and chaos there. Even so, many blacks were left behind. As we see in 'Roll of Thunder Hear My Cry,' slavery was a very big issue. There was a short phase where the blacks and whites tried to make peace with each other but it didn't work and soon the Northern states allowed the south to begin slavery once again. The North didn't help the newly freed slaves to protect their rights and let them have their freedom once again. Before I first began to read 'Roll of Thunder, Hear My Cry' I had no idea how much I would learn about racism. To me 'that word' just meant when people made cruel jokes about blacks, but I didn't realise just how badly the blacks were treated at the beginning of last century and before that. I think that the book is very interesting to read when you have never thought about racism properly before and also very interesting when you already know about these subjects. I think that the incidents I have described definitely describe the persecution of the blacks. After reading 'Roll of Thunder Hear My Cry,' I am undeniably thankful that these sorts of acts do not still go on today and I hope that they never will. ...read more.