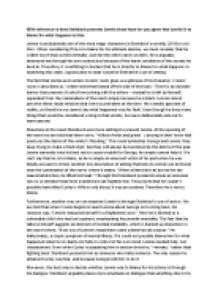 With reference to how Steinbeck presents Lennie show how far you agree that Lennie is to blame for what happens to him.

Transfer-Encoding: chunked ﻿With reference to how Steinbeck presents Lennie show how far you agree that Lennie is to blame for what happens to him. Lennie is undoubtedly one of the most tragic characters in Steinbeck?s novella, Of Mice and Men. When considering if he is to blame for his ultimate demise, we must consider that he is little more than a child mentally. Just like the other ranch workers, he is arguably destroyed not through his own actions but because of the harsh conditions of the society he lived in. Therefore, it is unfitting to declare that he is directly to blame for what happens. In examining this claim, a good place to start would be Steinbeck?s use of setting. The fact that Lennie even enters Crooks? room gives us a glimpse of his character. Crooks? room is described as, ?a little shed that leaned off the side of the barn.? There is an invisible barrier that prevents Crooks from joining with the others ? instead he is left by himself, separated from the camaraderie of the ranch simply because he is black. ...read more.

The fact that he talks to himself suggests an element of mental instability, which is backed up elsewhere in the novel where, ?from out of Lennie?s head there came a little fat old woman.? He hallucinates, a classic symptom of mental illness. We could not possibly blame him for what happened when he is clearly not fully in control of his own mind. Lennie needed help, not chastisement. Even when Curley is assaulting him in section three he, ?retreats,? rather than fighting back. Steinbeck presents him as someone who hates violence. The only reason he attacked Curley was fear, and because George told him to do it. Moreover, the best way to decide whether Lennie was to blame for his actions is through his dialogue. Steinbeck arguably places more emphasis on dialogue than anything else in his novella. The characters speak with a mixture of phonetic spelling and slang terms. Lennie?s speech is especially odd due to his learning difficulties. We see this in phrases such as, ?Maybe George come back already.? His incorrect syntax is somewhat of a linguistic shibboleth that proves how different he is from the rest of the men. ...read more.

For example, in the first section we are told that he, ?made an elaborate pantomime of innocence,? when George accuses him of harbouring the dead mouse. Here he is presented as someone that would lie to his best friend to get his own way. Another key action to mention would be, ?Lennie avoided the bait. He had sensed his advantage.? Lennie can be manipulative when he wants to be, and knows when he has the upper hand in a conversation. Perhaps he is more intelligent than we realise. He plays on George?s guilt, such as when he threatens to, ?find a cave.? Therefore Steinbeck conveys that he can be emotionally controlling. To conclude, it would be inappropriate to blame a single person for what happens to Lennie. We could not possibly declare that Lennie is wholly at fault. It is a combination of things, such as the harsh society and his apparent mental illness. Steinbeck cleverly tells a story where not one person is innocent. Everybody on the ranch has a part to play in the tragedy that unfolds. It conveys the utter despondency that plagued the itinerant workers of the 1930s. ...read more.