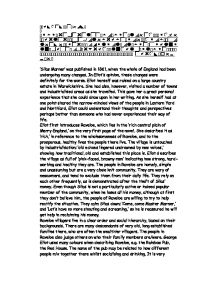 With reference to the novel 'Silas Marner,' demonstrate how Eliot conveys her opinion on the changing face of rural England in the early 1800's

Families like the Casses of Raveloe may seem like they have everything, but they have deep, dark secrets we learn more about through the course of the novel. This adds realism to Raveloe, so we can empathise with the people and not feel it is a fairytale place that doesn't exist. The family lives in the Red House, which is significant as whilst it is a rich colour showing their opulent and affluent lifestyle, it could also be seen as a colour of danger, a warning. In Chapter 6 we learn more about the villagers, their superstitions and weaknesses, so they too are seen as real, which makes the story more interesting and makes us take Raveloe seriously. However, despite these clear flaws, Eliot still shows an obvious preference for the 'snug, well-wooded hollow' of traditional Raveloe, to the grim industrialisation of Lantern Yard and North'ard. Before his move to Raveloe, we learn Silas Marner lived in a place called Lantern Yard. He could not have picked another two places that were so different. Lantern Yard was very isolated and introverted, even in their so called 'community' there was still betrayal of trust and lies. Although in their 'brethren' they refer to each other as 'brother' and 'sister' there is no real sense of concern or care for each other. ...read more.

Names like 'Prison Street' are significant as they enhance the feeling of containment and limitations. Eppie says how 'stifling' she finds this place, she is already sensing the confinement and restrictions of North'ard although she hadn't been there long at all. Eliot is showing that once you have lived in a place like Raveloe, with it's 'orchards looking lazy' and 'beautiful plains' you start to realise how grim places like Lantern Yard and North'ard are. Personal experience could also have helped Eliot here as she grew up on a farm in the countryside and then visited many towns, so she could understand Eppie's point of view. After traipsing through North'ard, Silas and Eppie find Lantern Yard no longer exists - it has been replaced by a factory. This is significant as it shows how much has changed and what will eventually happen to all of England. It shows that if Lantern Yard has been destroyed, how long will Raveloe stay like it is? As you read Silas Marner you can see how, throughout the novel, Eliot portrays her disapproval of industrialisation. She uses the contrast between the two places Silas has lived in to help us understand, appreciate and develop this dislike of the overpowering sense of darkness and ugliness that comes with the destruction of villages like Raveloe. Eliot sees these changes as inevitable, but would like to preserve the individuality they have in the countryside. ...read more.