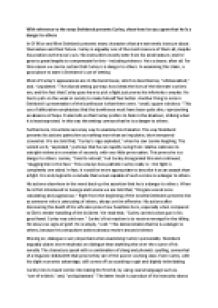 With reference to the ways Steinbeck presents Curley, show how far you agree that he is a danger to others

Transfer-Encoding: chunked ﻿With reference to the ways Steinbeck presents Curley, show how far you agree that he is a danger to others In Of Mice and Men Steinbeck presents many characters that are extremely insecure about themselves and their future. Curley is arguably one of the most insecure of them all, despite his position as the boss?s son. His insecurities mostly stem from his small stature, and he goes to great lengths to compensate for this ? including violence. He is a boxer, after all. For this reason we can be certain that Curley is a danger to others. In examining this claim, a good place to start is Steinbeck?s use of setting. Most of Curley?s appearances are in the bunk house, which is described as, ?whitewashed,? and, ?unpainted.? The dismal setting portrays how bleak the lives of the itinerant workers are, and the fact that Curley goes here to pick a fight just proves his inferiority complex. He has to pick on the weak in society to make himself feel better. ...read more.

His actions after discovering the death of his wife also prove how heartless he is, especially when compared to Slim?s tender handling of the incident. We read that, ?Curley carried a shot gun in his good hand. Curley was cold now.? Curley?s first reaction is to receive revenge for the killing. He shows no signs of grief. He is simply, ?cold.? This demonstrates that he is a danger to others, because his compulsive actions always revolve around violence. Moving on, dialogue is very important when examining Curley?s personality. Steinbeck arguably places more emphasis on dialogue than anything else over the course of his novella. The characters speak with a combination of slang and phonetic spelling, somewhat of a linguistic shibboleth that proves they are of the poorer working class. Even Curley, with his slight economic advantage, still comes off as sounding rough and slightly intimidating. Curley tries to taunt Lennie into taking the first hit, by using coarse language such as, ?son-of-a-bitch,? and, ?ya big bastard.? The latter insult is a product of his insecurity about his height. ...read more.

We are told that, “he stood crying.” This is a vast dissimilarity to his previous behaviour. Through this presentation Steinbeck proves that he is nowhere near as tough as he makes himself out to be. We also get hints that he is afraid of the other men, especially Slim and Carlson. Carlson tells his, “you’re as yella as a frog’s belly,” and even old Candy joins in to taunt him. Curley never dares to fight them. Perhaps Steinbeck intended us to pity Curley, a man that in different circumstances may not have posed any danger to others. It could be argued that Curley is simply a product of the harsh time in which he lived, where he had no choice but to fight in order to survive. Maybe all he craves is acceptance. To conclude, Steinbeck presents Curley as a man that is dangerous to only certain types of men. He is undoubtedly dangerous for the mice of the ranch, such as Lennie. However, he poses no danger to those that are confident enough to rebuke him. His aggressiveness is little more than a façade. He embodies how harsh live was in 1930s America. ...read more.