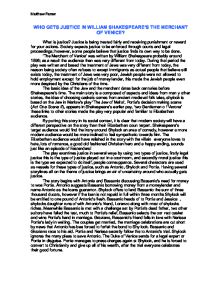 Wo gets justice in the Merchant of Venice?

WHO GETS JUSTICE IN WILLIAM SHAKESPEARE'S THE MERCHANT OF VENICE? What is justice? Justice is being treated fairly and receiving punishment or reward for your actions. Society expects justice to be enforced through courts and legal proceedings; however, some people believe that justice finds its own way to be done. 'The Merchant of Venice' was written by William Shakespeare probably around 1596; as a result the audience then was very different from today. During that period the play was written and based the treatment of Jews was very different from today, the reason being society often refuses to except immigrants as actual people that believe still exists today, the treatment of Jews was very poor, Jewish people were not allowed to hold employment except for the job of money lender, this made the Jewish people even more despised by the Christians of the time. The basic idea of the Jew and the merchant dates back centuries before Shakespeare's time. The main story is a composed of aspects and ideas from many other stories, the idea of choosing caskets comes from ancient medieval folk tales, shylock is based on the Jew in Marlow's play 'The Jew of Malta', Portia's decision making scene (Act One Scene II), appears in Shakespeare's earlier pay, 'two Gentlemen of Verona' these links to other stories made the play very popular and familiar to Elizabethan audience. ...read more.

"How like a fawning publican Iooks. I hate him for he is a Christian: But more, for that in low simplicity He lends out money gratis, and brings down The rate of usance here with us in Venice. If I can catch him on the hip, I will feed fat the ancient grudge I bear him. He hates our sacred nation,..." Shylock about Antonio, (Act 1 Scene III) During the conversation between Antonio, Shylock and Bassanio, Shylock uses a bible story to explain how important a guarantee is, in any deal to which Antonio replies: "The devil can cite scripture for his purpose," Antonio (Act 1 Scene III) Shylock and Antonio start to argue about there bitter past, Shylock turns the fiery discussion back to the bond, Antonio agrees to the bond, it could be argued that Shylock took advantage of Antonio's pride. From a legal perspective the bond is perfectly legal however, morally some would say that putting a price on any amount of human flesh is wrong, a second moral issue is whether or not Shylock had the specific pound of flesh in mind when he announced the bond. The conflict between Jews and Christians is partly to blame for the serve punishment. The bond is defiantly legally binding however morally it is unclear how just the bond is. ...read more.

In terms of Portia and Jessica there are similarities between them, both of them have been set rules by there fathers, Portia follows hers and her father although dead, receives the moral justice he deserves however Jessica ignores her rules adding to the justice Shylock is denied. Antonio on the other hand deserves nothing, he was under no obligation to agree to the bond, although he was undertaking it for the right reasons, Bassanio the reason for the bond tried to persuade Antonio to not bother but Antonio's pig headed pride takes charge. Furthermore Antonio's treatment of Shylock was utterly appalling and is the ultimate reason for shylocks bitterness. Although it wasn't his fault he couldn't repay the loan, the only reason he entered into it in the end was to prove a point over Shylock. Antonio deserves nothing but somehow justice is miscarried and he gets everything. Portia gets the justice she deserves for obeying her fathers wishes, by Bassanio winning the challenge, however she wrongs Shylock and robs him of his livelihood, and lies to the court, she escapes justice as she should have been tried. In conclusion, Shylock is the one who should be getting the justice as he deserves it, but it is robbed from him by those who don't. ?? ?? ?? ?? Matthew Farren ...read more.