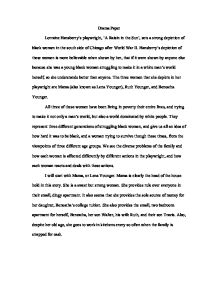 Women in 'A Raisin in the Sun'

Drama Paper Lorraine Hansberry's playwright, 'A Raisin in the Sun', sets a strong depiction of black women in the south side of Chicago after World War II. Hansberry's depiction of these women is more believable when shown by her, that if it were shown by anyone else because she was a young black woman struggling to make it in a white man's world herself, so she understands better than anyone. The three women that she depicts in her playwright are Mama (also known as Lena Younger), Ruth Younger, and Beneatha Younger. All three of these women have been living in poverty their entire lives, and trying to make it not only a man's world, but also a world dominated by white people. They represent three different generations of struggling black women, and give us all an idea of how hard it was to be black, and a woman trying to survive though these times, from the viewpoints of three different age groups. We see the diverse problems of the family and how each woman is affected differently by different actions in the playwright, and how each woman reacts and deals with these actions. I will start with Mama, or Lena Younger. Mama is clearly the head of the house hold in this story. She is a sweet but strong woman. ...read more.

She sees him in a slump, and he is not going to work, and he is drinking everyday, and she thinks that if she gives him the money to put in a bank under his name, and makes him the head of the household, that it will bring him out of his slump, but she is extremely mistaken. From her homely and soft character in the beginning, to the trustworthy, strong, independent depiction in the end, we saw what it was like to be an older black woman in racist times through the eyes of mama. But being a black woman in your thirties, with a husband and a child, was a completely different story, as we learn through the eyes of Ruth Younger, wife of Walter, and mother of Travis. Ruth is automatically depicted as a tired, overworked young woman who has been ravaged by harsh time and brought down by demeaning work on top of having to take care of family, cook, clean, and do laundry. Everyday she has to deal with her young son's objections to her orders, and her husband's sarcasm and complaints about the dissatisfaction of his life. Then she has to go to work and labor all day to just barely make ends meet in their small two bedroom apartment, in which her son sleeps on the sofa in the living room. ...read more.

Most of the times she seem very self centered and doesn't really think about her family that much. She doesn't think about the fact that the money being used to pay for her extracurricular activities could be used for food and other more important things for everyone in the house. She is very intellectual though, and highly appreciated for her inability to accept the role everyone wants her to accept, which is the role of a spineless woman, doing what her man tells her to do, taking on demeaning jobs, and bearing children, so basically, being an object. She later shows a harshness that is understandable, yet looked on painfully as she basically massacres her brother for losing the money for her college tuition, even though he is going through a really tough spot and that is when he needs his family the most, but she later seems to somewhat forgive him, and goes on talking about her African boyfriend and how she might marry him and move to Nigeria to become an African queen. These three women set the depiction of what it was to be a black woman trying to make it through the racism and sexism of their time, and Hansberry did an excellent job of portraying them. Looking back on it, now we can all understand what it was like and what these women had to go through living in those times. ?? ?? ?? ?? 2 ...read more.