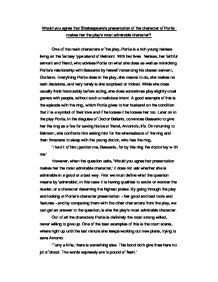 Would you agree that Shakespeare's presentation of the character of Portia makes her the play's most admirable character?

Would you agree that Shakespeare's presentation of the character of Portia makes her the play's most admirable character? One of the main characters of the play, Portia is a rich young heiress living on the fantasy type island of Belmont. With her lives Nerissa, her faithful servant and friend, who advises Portia on what she does as well as mimicking Portia's relationship with Bassanio by herself romancing his closest servant, Gratiano. Everything Portia does in the play, she means to do, she makes no rash decisions, and very rarely is she surprised or tricked. While she does usually think honourably before acting, she does sometimes play slightly cruel games with people, without such a malicious intent. A good example of this is the episode with the ring, which Portia gives to her husband on the condition that it is a symbol of their love and if he looses it he looses her too. ...read more.

She is also versatile, able to adapt to different situations quite easily. This can include minor things such as the difference between politeness for the courtiers and actual excitement for Bassanio, or things like pretending to be a male lawyer. She accomplishes them all without difficulty, despite her lack of interaction in the world outside Belmont, which means it is probably due to her intelligent character and good upbringing. These roles she plays are usually either to deceive other characters in the play, or to assist them, or maybe both, and sometimes just for the adventure, 'When we are both accoutred like young men I'll prove the prettier fellow of the two, And wear my dagger with the braver grace, And speak between the change of man and boy With a reed voice, and turn two mincing steps Into a manly stride; and speak of 'frays' Portia is quite deceptive; she lies quite a bit, yet she speaks her mind nearly all the time. ...read more.

Bassanio and Portia have not that much in common, in fact a lot of the time they are act quite opposite to each other. Bassanio is quite forgiving, but Portia seems to always hold a grudge and remember past grievances. Compared with Jessica she is also quite different. Both women have lost virtually their entire family, and are haunted by their father's attempts to control their lives, but still act quite differently, again Portia seeming the slightly more aggressive and nasty one. Overall, in my opinion, Portia's character presentation is not the most admirable of the play, for although she acts with the intention of good faith, she often ends up doing things in a sly and callous way that undermines her other polite, kind, and considerate type qualities. In my view Bassanio is the most admirable character by far, taking a neutral stance on most things, rarely making cruel remarks or actions against anyone, with the exception of Shylock in the court scene. 'This is no answer, thou unfeeling man, to excuse the current of thy cruelty.' ...read more.