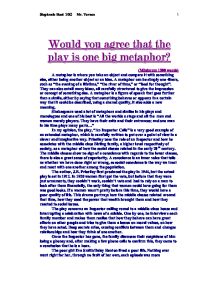 Would You Agree That the Play Is One Big Metaphor?

Would you agree that the play is one big metaphor? (Minimum 1500 words) A metaphor is where you take an object and compare it with something else, either being another object or an idea. A metaphor can be simply one-liners, such as "the evening of a lifetime," "the river of time," or "food for thought". They can also entail many ideas, all carefully structured to give the impression or concept of something else. A metaphor is a figure of speech that goes further than a simile, either by saying that something behaves or appears in a certain way that it could be described, using a shared quality, it also adds a new meaning. Shakespeare used a lot of metaphors and similes in his plays and monologues and one of his best is "All the worlds a stage and all the men and women merely players. They have their exits and their entrances; and one man in his time plays many parts..." In my opinion, the play, "An Inspector Calls" is a very good example of an extended metaphor, which is carefully written to put over a point of view in a clever and imaginative way. Priestley uses the role of an Inspector and how he associates with the middle class Birling family, a higher level respectively of society, as a metaphor of how the social classes related in the early 20th century. The middle classes show no sign of a conscience with regards to the lower classes, there is also a great sense of superiority. A conscience is an inner voice that tells us whether we have done right or wrong, so social conscience is the way we treat and react with one another among the population. The author, J.B. Priestley first produced the play in 1944, but the actual play is set in 1912. In 1928 women first got the vote, but before that they were just ornaments, they couldn't work, couldn't vote and had to rely on a man to look after them financially, the only thing that women could have going for them was good looks. ...read more.

In hindsight we can see that the "fire and blood and anguiosh" that the Inspector was describing happened in the case of the First World War. This had started because the countries of Europe, instead of existing together had formed themselves into two camps, with the countries within them allied together. Serbia was Russia's ally, who was also on the side of Britain and France, who had both promised to protect Belguim. Austria and Germany (and later Italy) were also allies. When Austria attacked Serbia, the Russians declared war on Austria and the Germans invaded Belgium, send Britain and France into battle. The result was a hellish war in which millions died. Had the countries been able to live together then there would not have been a war. The fact that the play was written in the midst of the Second World War suggests that Priestley was saying that the lessons of what happened in World War One had not been learnt, for which World War Two inevitably occurred. The genre of this play would seem to be a murder mystery, written in a literal and 'sensible' manner, which you believe could happen in real-life, only if you take the book at face value. You could argue the fact that the Inspector was just a normal man, with little bits of information from here and there within the public and help form Eva/Daisy, had plotted and schemed the whole thing up. As the characters argue:- Mrs. Birling "He never talked like one. He never even looked like one." Birling "That definitely wasn't a police Inspector at all." Inspector - "I'm losing all my patience with you people," (Page 56). A real police Inspector wouldn't be able to speak to you like that, or he could lose his licence. Stage directions - Sheila [to Inspector] stares at him wonderingly and dubiously. Sheila (Slowly) "You mustn't try to build up a wall between us and that girl. ...read more.

Another example of this ignorance is the fact that neither has heard of the Palace Bar, where both Gerald and Eric met Eva/Daisy whilst the men definitely do. To answer the question of "Is the play really a metaphor?" I can conclude that the answer is yes. In my interpretation of the play, there is no right or wrong person to blame for Eva's death and this is this message that Priestley wants to put across. The fact that the Inspector didn't really exist doesn't really matter, the way that one family's actions affected a poor young girl still remains a fact. Mr and Mrs Birling don't think they have done anything wrong and go back to their old conceited ways once the inspector is disproved. Actually, I believe that it should make the visit an even more dramatic experience for them. It gives the inspector a supernatural quality, sent as a messenger from God to change the way these people lived their lives. Arthur Birling represents Priestley's hared of businessmen who are only interested in making money. Priestley leaves the play unclosed, leaving the audience to think about the play and draw their own conclusions. This is a very good tactic by Priestley, as it makes people think about what they saw, hopefully making them realise that aspects of their life should be changed for the good of humanity. Now that you can see whom the Inspector had an effect on and whom he made no impact on at all. He had a tremendous effect on Sheila and not so much on Birling. The play promotes a socialist idea through the Inspector very well. Overall it is a very clever play, making the audience think, not just of themselves, but others as well. Priestley touched the conscience of me and made me realise that every action has a reaction. Even if the only person it has affected throughout the world is me, through his beliefs and teachings, I could put his practise into my preaching and help benefit others. 1 1 Stephanie Boot 10G Mr. Vernon ...read more.