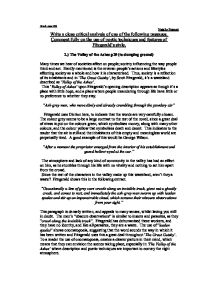 Write a close critical analysis of one of the following passages. Comment fully on the use of poetic techniques and features of Fitzgerald's style.

Word count 900 Natalie Burnett Write a close critical analysis of one of the following passages. Comment fully on the use of poetic techniques and features of Fitzgerald's style. 2.) The Valley of the Ashes p29 (to dumping ground) Many times we hear of societies affect on people; society influencing the way people think and act. Hardly mentioned is the reverse: people's actions and lifestyles affecting society as a whole and how it is characterised. Thus, society is a reflection of its inhabitants and in 'The Great Gatsby', by Scott Fitzgerald, it's a wasteland described as 'Valley of the Ashes'. This 'Valley of Ashes' upon Fitzgerald's opening description appears as though it's a place with little hope, and a place where people meandering through life have little or no preference to whether they stay. "Ash-grey men, who move dimly and already crumbling through the powdery air" Fitzgerald uses Diction here, to indicate that the words are very carefully chosen. The colour grey seems to be a large contrast to the rest of the novel, since a great deal of stress is put ...read more.

This paragraph is densely written, and appeals to many senses, whilst laving you still in doubt. The men's "obscure observations" is similar to insects and parasites, as they "crawl along the invisible track". Fitzgerald has dehumanised these workers, and they have no identity, and like all parasites, they are a waste. The use of "leaden spades" shows onomatopoeia, suggesting that the word sounds the way in which it has been written and Fitzgerald uses this a great deal throughout 'The Great Gatsby'. To a reader the use of onomatopoeia, creates a clearer picture in their mind, which means that they can envision the scenes taking place, especially in 'The Valley of the Ashes' where description and poetic techniques are important to convey the right atmosphere. Natalie Burnett Within the description of 'The Valley of Ashes', Fitzgerald also uses poetic techniques such as personification. "The motor road hastily joins the railroad and runs beside it for a quarter of a mile" This creates an image that the motor road is slightly human, is able to literally do the things that a person can do. ...read more.

However, as the passage unfolds, it is easy to establish that these faceless eyes are only an advertisement. "Evidently some wild wag of an oculist set them there to fatten his practice in the Borough of Queens, and then sank down himself into eternal blindness, or forgot them and moved away." The use of "wild wag" shows more alliteration, and some sarcasm, which Fitzgerald tends to use in 'The Great Gatsby'. Fitzgerald has used "eternal blindness" as irony in this passage, indicating that the owner of the advertisement has died. In conclusion I feel that Fitzgerald produces a very convincing and realistic opening to 'The Valley of the Ashes' and describes it most effectively. His use of Alliteration, Simile, Onomatopoeia, Personification and Diction all help create an atmosphere that is empty and barren. However Fitzgerald also uses less obvious techniques, such as embroidering irony and sarcasm throughout the novel, I think that a reader studying this novel finds his techniques a little excessive sometimes, nevertheless he manages to develop 'The Valley of Ashes' through these extreme techniques, and does this very soundly as an author. ...read more.