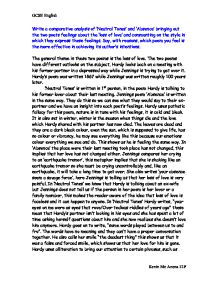 Write a comparative analysis of 'Neutral Tones' and 'Absence' bringing out the two poets feelings about the 'loss of love' and commenting on the style in which they express these feelings.

Write a comparative analysis of 'Neutral Tones' and 'Absence' bringing out the two poets feelings about the 'loss of love' and commenting on the style in which they express these feelings. Say, with reasons, which poem you feel is the more effective in achieving its author's intentions. The general theme in these two poems is the loss of love. The two poems have different outlooks on the subject, Hardy looks back on a meeting with his former partner in a depressed way while Jennings is trying to get over it. Hardy's poem was written 1867 while Jennings was written roughly 100 years later. 'Neutral Tones' is written in 1st person, in the poem Hardy is talking to his former lover about their last meeting. ...read more.

Jennings compares her crying to an 'earthquake tremor', this metaphor implies that she is shaking like an earthquake tremor so she must be crying uncontrollably and, like an earthquake, it will take a long time to get over. She also writes 'your absence seem a savage force', here Jennings is telling us that her loss of love is very painful. In 'Neutral Tones' we know that Hardy is talking about an ex-wife but Jennings does not tell us if the person in her poem is her lover or a family member, this makes the reader aware of the idea that loss of love is faceless and it can happen to anyone. In 'Neutral Tones' Hardy writes, "your eyes on me were as eyes that rove/Over tedious riddles of years ago" these mean that Hardy's partner isn't looking in his eyes and she has spent a lot of time asking herself questions about him and she now realizes she doesn't love him anymore. ...read more.

In the fourth verse he tells us how the break up has affected him now and how his feelings of that day still haunt him, he now has a cynical view of love. The last verse is very broken up, he creates a stop-start staccato effect. Jennings uses three verses of five lines, she also includes end-rhyme. In verse 1 she describes the setting of the garden, in verse 2 she realizes that she is still sad and hasn't got over her loss of love. The third verse shows how she really feels when she breaks down and starts to cry because the setting reminds her of the person she has lost. From the two poems I believe that Hardy's "Neutral Tones" is more effective. I feel he uses better imagery and metaphors and gets his point across better, the scene he sets suits the poem better than Jennings. GCSE English Kevin Mc Anena 12F ...read more.