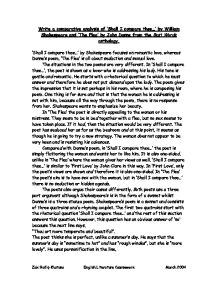 Write a comparative analysis of 'Shall I compare thee...' by William Shakespeare and 'The Flea' by John Donne from the Best Words anthology.

Write a comparative analysis of 'Shall I compare thee...' by William Shakespeare and 'The Flea' by John Donne from the Best Words anthology. 'Shall I compare thee...' by Shakespeare focuses on romantic love, whereas Donne's poem, 'The Flea' is all about seduction and sexual love. The situations in the two poems are very different. In 'Shall I compare thee...', the poet is shown as a lover who is addressing his lady. His tone is gentle and romantic. He starts with a rhetorical question to which he must answer and therefore he does not put demand upon the lady. The poem gives the impression that it is set perhaps in his room, where he is composing his poem. One thing is for sure and that is that the woman he is addressing is not with him, because all the way through the poem, there is no response from her. Shakespeare wants to emphasize her beauty. In 'The Flea' the poet is directly appealing to the woman or his mistress. They seem to be in bed together with a flea, but no sex seems to have taken place. If it had, then the situation would be very different. The poet has seduced her as far as the bedroom and at this point, it seems as though he is going to try a new strategy. The woman does not appear to be very keen and is resisting his advances. ...read more.

However, the poet uses her triumph in his own favour. He says that since nothing has happened due to the killing of the flea, then surely nothing would happen if she were to give in to him. She would not lose "so much honour". Syllogism is also used in 'To His Coy Mistress" by Andrew Marvell. Marvell is also trying to get the woman in the poem to have sex with him. He firstly argues that if they had all the time they wanted, they could progress their relationship slowly. He goes on to say that time isn't in their hands and then finally argues that, because of the situation, they should make the most of their time, and therefore have sex now. In 'The Flea', Donne uses the flea as the structure of his argument, however Marvell uses time to link the poem and his argument. Marvell uses other things in his argument to convince the woman in his poem. He uses the idea of space, by talking about the rivers "Ganges" and "Humber". He is trying to say that if they had all the space they wanted, they could let their relationship develop slowly. The poet also uses words associated with death, such as "grave" and "ashes", to convince the woman to have sex with him before it is too late. 'The Flea' is a battle of logical argument between the man and the woman. ...read more.

The rhyming couplet concludes the poem and signals the end. The metre used is iambic pentameter, which includes five stressed, and five unstressed syllables for every line. Shakespeare does appear to use a three-part argument, but it is not as apparent is in 'The Flea'. Shakespeare firstly argues whether he should or should not compare the woman to a summer's day. He secondly argues how imperfect a summer's day is unlike her. Lastly, he argues that as long as this poem survives, her celebrated beauty will survive as well. 'The Flea' has a regular rhyme scheme of aabbccdd, which gives it a regular rhythm. This poem is a mixture of pentameter, which are ten syllable lines, and tetrameters, which are eight syllable lines. Donne uses an obvious three-part argument, or syllogism, where he uses the flea to structure it. Shakespeare uses a sonnet, which was a traditional way of writing about romantic love. Donne's poem is more intellectual in which he uses persuasive and rhetorical devices. The comparison's Shakespeare uses are passionate and interesting, but Donne's poem is more enjoyable to read since it uses wit and a clever structure to make it entertaining. The farfetched idea of using a flea to persuade a woman for sex is very unusual and makes the poem more enjoyable. Shakespeare's poem is more typical of a love poem, since the language he uses is more affectionate, but I have found Donne's more appealing to read because the wittiness and content of the poem is so unexpected. Zaki Rafiq-Khatana English Literature Coursework March 2004 ...read more.