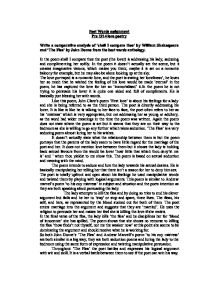 Write a comparative analysis of 'shall I compare thee' by William Shakespeare and 'The Flea' by John Donne from the best words anthology.

Best Words assignment Pre 1914 love poetry Write a comparative analysis of 'shall I compare thee' by William Shakespeare and 'The Flea' by John Donne from the best words anthology. In the poem shall I compare thee the poet (the lover) is addressing his lady, seducing and complimenting her softly. In the poem it doesn't actually set the scene, but it creates imaginative visions, which makes you think, maybe it is set on a romantic balcony for example, but he may also be alone looking up at the sky. The love portrayed is a romantic love, and the poet is stating her loveliness', he loves her so much that he wished the feeling of his love would be made 'eternal' in the poem, he has captured the love for her an 'immortalised' it.In the poem he is not trying to persuade his lover it is quite one sided and full of compliments. He is basically just blessing her with words. Like this poem, John Clare's poem 'First love' is about his feelings for a lady and she is being referred to as the third person. ...read more.

The lady attempts to kill the flea and by doing so tries to end his clever argument but fails and he her to 'stay' or stop and spare, three lives. The fleas, his self, and hers, as represented by the blood sucked out for both of them. The poet enters marriage into the argument and suggests that they are 'married'. He uses the religion to persuade her and makes her feel she is killing the love if she resists. In the final verse of the flea, the lady kills 'the flea' and he disciplines her for 'blood of innocence' she has spilled. The poem shows that she shows no remorse to killing the flea 'thow finds't not thyself, nor me the weaker now' at this point she seems to be dominating the argument and should receive what he is working for. So both John Donne's 'The Flea' and Andrew Marvell's poem 'to his coy mistress' are both similar in a big way, they are both seduction poems and luring the lady to the bedroom using the same form of expression and twisting manipulative persuasion. ...read more.

The metaphor used in this poem 'though parents grudge, and you, were met, and cloistered in these luring walls of jet'. This shows that the parents, again, are in fact against the idea of the poet with their daughter. He is banking on the idea that no young lady would want to be ordered and ruled by their parents and would rebel as she wouldn't want to be dominated by them. This is heavy manipulation and he is obviously aiming drive the lady into thoughts of rebellion against the thought of them stopping her which may forward herself into his wishes. He also states the walls as 'jet', which portrays the vision of the dark body of the flea. The tone of the language used in the flea again is extremely manipulative, and intellectual than 'shall I compare thee' as Shakespeare's poem is more focused on complimenting his mistress. The rhyme scene of the poem is A B A B C D C D E F E G G. Using fourteen lines, ten syllables with rhyming words in sequence of every other line. ...read more.