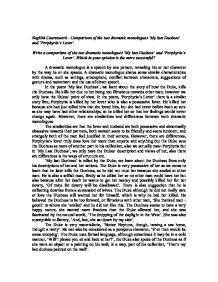 English Coursework - Comparison of the two dramatic monologues 'My last Duchess' and 'Porphyria's Lover' Write a comparison of the two dramatic monologues 'My last Duchess' and 'Porphyria's Lover'. Which in your opinion is the more successful? A dramatic monologue is a speech by one person, revealing his or her character by the way he or she speaks. A dramatic monologue shares some similar characteristics with drama, such as settings, atmosphere, conflict between characters, suggestions of gesture and movement and the use of direct speech. In the poem 'My last Duchess', we learn about the story of how the Duke, kills the Duchess. He kills her due to her being too flirtatious towards other men, however we only have the Dukes' point of view. In the poem, 'Porphyria's Lover' there is a similar story line; Porphyria is killed by her lover who is also a possessive lover. He killed her because she had just tolled him that she loved him, but she had never before been so sure as she may have had other relationships, so he killed her so that her feelings would never change again. However, there are similarities and differences between both dramatic monologues. ...read more.

The Duke is very materialistic, 'Notice Neptune, though, taming a sea horse, thought a rarity'. He can also be considered as a pompous character, 'E'en then would be some stooping'. The Duke uses formal language, although sometimes it may be in a cold manner, 'Will't please you sit and look at her?', the Duke also spoke of the Duchess as if she were an object or a painting on his wall, in a way, part of his collection, 'That's my last duchess painted on the wall'. His speech is very skilled by is at times self-deprecating, using techniques like fake modesty, 'Even had you skill in speech - (which I have not)'. The Lover in Porphyria's Lover seems similar in the ways of being just as possessive and maybe more obsessive. However, the lover is very much in love with Porphyria and this is why he takes her life, as he killed her with her own hair when she tolled him that she loved him, 'that moment she was mine, mine'. The fact that he was so overwhelmed and in love with her is shown by him killing her to save that moment and her love for him. ...read more.

'My Last Duchess', uses rhyming couplets, a rhyming pattern of AA, BB, with five syllables in each line and iambic pentameter (five beats in a line), whereas the second poem, 'Porphyria's Lover', uses a rhyming pattern on A, B, A, B, B, which is very different with a iambic tetrameter rhythm. He uses different patterns to suit the poems and their moods. The language in both is archaic, 'Nor could to-nights gay feast restrain'. The use of vivid descriptions in Porphyria's Lover, for example, when her lover is killing her is very effective and hard hitting, I feel this use of strong description is very good, it brings out the lovers true feelings and his act although selfish goes by without any guilt felt by him. Both poems use metaphors and similes, 'and there she stands as if alive'. I find Porphyria's Lover to be the most affective out of the two poems, however My Last Duchess is still a very good poem and an effective dramatic monologue but not as descriptive or moving or even shocking as Porphyria's Lover, which I feel is much more vivid with descriptions and is more in tense in comparison with 'My Last Duchess'. ?? ?? ?? ?? ...read more.