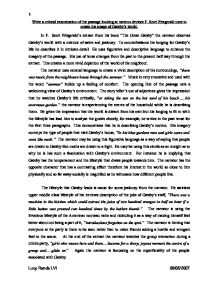 Write a critical examination of the passage looking at various devices F. Scott Fitzgerald uses to create his image of Gatsby's world.

Write a critical examination of the passage looking at various devices F. Scott Fitzgerald uses to create his image of Gatsby's world. In F. Scott Fitzgerald's extract from his book "The Great Gatsby" the narrator observes Gatsby's world with a mixture of satire and jealousy. To counterbalance his longing for Gatsby's life he describes it in intricate detail. He uses figurative and descriptive language to enhance the imagery of the passage. His use of tense changes from the past to the present half way through the extract. This creates a more vivid depiction of the world of his neighbour. The narrator uses sensual language to create a vivid description of his surroundings, "there was music from the neighbours house through the summer." Music is very evocative and used with the word "summer" builds up a feeling of comfort. The opening line of the passage sets a welcoming view of Gatsby's environment. The story teller's use of adjectives gives the impression that he watches Gatsby's life critically, "or taking the sun on the hot sand of his beach.....his enormous garden." ...read more.

The narrator has the opposite character that has a contrasting effect therefore his interest in the world so close to him physically and so far away socially is magnified as he witnesses how different people live. The lifestyle that Gatsby leads is cause for some jealousy from the narrator. He satirises upper middle class lifestyle of his intricate description of the jobs of Gatsby's staff, "There was a machine in the kitchen which could extract the juice of two hundred oranges in half an hour if a little button was pressed two hundred times by the butlers thumb." The narrator is using the frivolous lifestyle of the American nouveau riche and ridiculing it as a way of making himself feel better about not being a part of it, "introductions forgotten on the spot." The narrator is hinting that everyone at the party is there to be seen rather than to make friends adding a hostile and arrogant feel to the scene. ...read more.

He has spent three paragraphs preparing the reader and introducing them to Gatsby's world and in doing so has given an insight to his own life. The tense helps build up to the climax of the passage. The narrator describes the event in intricate detail as if he is talking through the mind of Gatsby. He wants us to be thinking what Gatsby would wish us to think had we been at the party, "the orchestra has arrived, no thin five piece affair, but a whole pitful of oboes and trombones..." There is a tone of resentment in the structuring of the sentence the words that starts with consonance have a harsh impact on the reading of the line. The references to Gatsby's "maids", "butlers", "caterers" create an imagery of the house that Gatsby lives in. Colours are constantly alluded to throughout the passage. This increases the idea that Gatsby leads a lavish lifestyle. The story was published in 1925. Therefore the idea that the proprietor of the house can afford oranges, lemons, turkeys and an orchestra shows that he is intent on showing his money. ...read more.