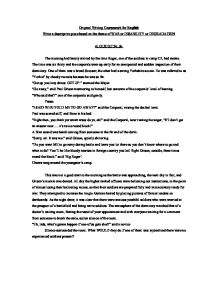 Write a descriptive piece based on the theme of war or disability or degradation.

Original Writing Coursework for English Write a descriptive piece based on the theme of WAR or DISABILITY or DEGRADATION 41 OUT OF 54: B+ The morning had barely arrived by the time Roger, one of the soldiers in camp C2, had awoke. The time was six thirty and the corporals were up early for an unexpected and sudden inspection of their dormitory. One of them was a broad Scouser; the other had a strong Yorkshire accent. He was referred to as "Yorkie" by cheeky recruits because he was so fat. "Get up you lazy shites. GET UP." stormed the Major. "Go away," said Paul Grison murmuring to himself, but unaware of the corporals' level of hearing. "Who said that?" one of the corporals said gently. Pause. "I SAID WHO TOLD ME TO GO AWAY?" said the Corporal, raising the decibel level. Paul was scared stiff, and froze in his bed. "Right then, you think yer smart arses do ya, eh!" said the Corporal, now venting his anger, "If I don't get an answer now ... it's twice round block!" A faint sound was heard coming from someone at the far end of the dorm. "Sorry, sir. It was me." said Grison, quietly shivering. "Do you want ME to go away during battle and leave you lot there so you don't know where to go and what to do? ...read more.

its war today lads, 'member" said Corporal Jones (Roger) sarcastically. "Anyone with nerves?" said Jones. "No, sir!" was the deafening reply from the camp. "Really ...?" Jones said, hoping for someone to pick on. He walked away, stoically hiding his delight at the atmosphere in the younger Martin was fresh and lively and made tea for everyone. Battle was due to start at nine. They washed, then consumed their breakfast steadily and were ready for there last kit inspection. "Perfect gentlemen." said corporal Thompson (the Scouser) "Sir!" said the brigade all at once, with confidence brimming. Every man was prepared and psyched up for war against the arch enemy. The corporals gave them a final, but gentle, lecture. "Now listen here lads, make sure y' don't mess this up and that y' stay on field" said Jones "Now go out there and kick some German backsides, for your country!" Both countries, England and Germany respectively, were eagerly awaiting the gunshot so that the battle could commence. BANG. Johnny had been shot in the forehead immediately by an extremely accurate shot from an enemy soldier. He released a cry of anguish and was in a state of severe distress. His fellow recruits halted their onslaught to attend the severe casualty. "What do we do now, sir? Carry on fighting, or save Johnny" said Leon, a neophyte, to an elder recruit. ...read more.

The gunshot which ceased the first day of fighting was heard clearly by most soldiers. The odd shot was fired after, but both 'countries' retreated to their base camp. The British soldiers were comprehensively vanquished after the first day of the gun battle. The light of the morning had faded away and dark skies were ruling the sky. The younger camp was left by the corporals to discuss a plan for the next day and try and regain some territory on the Germans. Thoughts of death, inferiority and failure were worrying the soldiers. They felt like ants, nowhere to hide, unable to present a challenge and liable to death at any point, with the Germans exerting minimal effort and force to kill them. As the night dragged on with some reluctance to start a new day, the atmosphere of the room was now genuine silence. It was as the recruits were already holding there minute's silence for the casualties. The following morning the corporals marched in with fresh optimism of a British onslaught. But the soldiers were behaving like school children, showing their displeasure at getting up early and not willing to attend school. Breakfast was due to start at seven, and the soldiers were not even ready to eat. The fighting resumed in an hour's time. Would they be ready for that? ...read more.