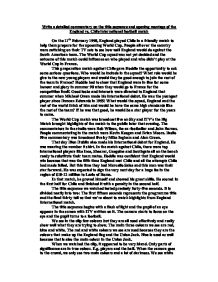 Write a detailed commentary on the title sequence and opening montage of the England vs. Chile international football match

Write a detailed commentary on the title sequence and opening montage of the England vs. Chile international football match On the 11th February 1998, England played Chile in a friendly match to help them prepare for the upcoming World Cup. People all over the country were switching on their TV sets to see how well England would do against the South American team. The World Cup squad was not yet decided and the outcome of this match could influence on who played and who didn't play at the World Cup in France. This preparation match against Chile gave Hoddle the opportunity to ask some serious questions. Who would he include in the squad? What role would he give to the new young players and would they be good enough to join the rest of the team in France? Hoddle had to show that England were in line for some honour and glory in summer 98 when they would go to France for the competition itself. Good looks and interests were directed to England that summer when Michael Owen made his international debut. ...read more.

The title sequence begins with a flash of light and the pupil of an eye appears in the screen with ITV written on it. The camera starts to focus on the eye and the pupil turns to a football. We see in the clip few colours but they are all used effectively and really show well what they are trying to show. The main three colours we see are red, blue and white. The red and white colours we see are used because they are the colours that make up the England flag and the Union Jack. Blue is used as well because that is also the main colour in the Union Jack. When we watched the clip, it appeared to be very bland. Only parts of significance are in true colour. E.g. players and the ball. When the camera goes to the crowd, we only see two main colours and a lot of darkness. We see white and red on their faces and then just their clothes as a dark grey/black. ...read more.

Put a football into a goal. Owen was England's youngest player of the century since Duncan Edwards in 1955. This World Cup, Dion Dublin was there and he was England's joker in the pack. He was an unproven man. As we watch England's top players score, we immediately see another goal and if you blink, you miss a top quality goal from a top quality player. We see lots of team support and celebration as player's score. The jump, shout, sit and the sequence continues to roll on. But there is not just silence as the clip goes on. We hear crowds shouting and a piece of music called Jerusalem. This just plays in the background and when the crowd cheers, it's just silenced out. But Jerusalem isn't the starting piece. The first fifteen seconds is loud, fast and energetic music that doesn't give the impression that a slow and quiet piece of music is about to be played. Throughout the sequence we see repeated images but from different angles. There are cameras that sit behind the goal ready to catch any shots and cameras that focus on the crowd. By using Technology, music can also have special effects like fading from one piece to another. ...read more.