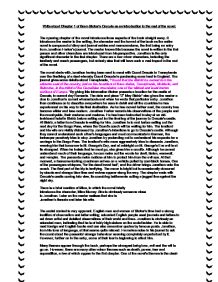 Write about Chapter 1 of Bram Stoker's Dracula as an introduction to the rest of the novel.

Write about Chapter 1 of Bram Stoker's Dracula as an introduction to the rest of the novel. The opening chapter of the novel introduces three aspects of the book straight away. It introduces the reader to the setting, the character and the format of the book as the entire novel is composed of diary and journal entries and memorandums, the first being an entry from Jonathon Harker's journal. The reader knows this because the novel is written in the first person and other characters are introduced from his perspective. Jonathon is the only significant character in the first chapter. There are a few minor characters, including the landlady and coach passengers, but nobody else that will have such a vast impact in the rest of the novel. The novel starts with Jonathon having been sent to meet with Count Dracula in Transylvania over the finalising of a deal whereby Count Dracula is purchasing some land in England. The journal gives some details about Transylvania, "I found that the district he named is in the extreme east of the country, just on the boarders of three states, Transylvania, Moldavia, and Bukovina, in the midst of the Carpathian mountains; one of the wildest and least known portions of Europe." ...read more.

The peasants obviously fear wherever it is that Jonathon is going and the person within. They talk about it in their native languages, something often done when a person is scared or trying to conceal something from a foreigner. Here, we see that for all of their backwardness the peasants know what Jonathan does not. When the coachman comes to collect Jonathan, the frightened carriage driver and the coachman have an exchange that makes it clear to the reader that the carriage driver was trying to trick (and save) Jonathan. He arrived an hour early and then tried to convince Jonathan to come to Bukovina, to get him away from Dracula's castle. The irony here is that Jonathan is ignorant of what is waiting for him at the castle; the quaint and uneducated peasant knows what the sophisticated and educated Englishman cannot seem to understand. The sign of the cross, the rosary, St. George's Day, all seem to be pointing at some impeding danger. This chapter is important, because not only does it have undercurrents of evil but also dwells on Jonathon's feeling of uneasiness. There are references of Ordog (Satan), Bokol (Hell), Stregoira (witch), Vrolok and Vikoslak, which mean wolf and vampires. ...read more.

the falling sunset threw into strange relief the ghost-like clouds Vampire legends have been a part of popular folklore in many parts of the world since ancient times. Throughout the Middle Ages and even into the modern era, reports of corpses rising from the dead with supernatural powers achieved widespread belief. The Dracula family, which the count describes with pride in the early chapters of the novel, is based on a real historical family. Its most famous member, Vlad Dracula-or Vlad the Impaler, as he was commonly known-enjoyed a bloody career that rivalled that of his fictional counterpart. The fifteenth-century Prince of Wallachia, Vlad was a brilliant yet savage general who impaled his enemies on long spikes. The prince also had a reputation for murdering beggars, forcing women to eat their babies, and nailing the turbans of disrespectful ambassadors to their heads. While Stoker's Count Dracula is supposed to be a descendant of Vlad, and not the prince himself, Stoker clearly makes the count resemble his fearsome ancestor. This historical allusion gives Dracula an air of truth, and Stoker wants to suggest that the documents assembled in the novel are real. ...read more.

A more definite conclusion which summarises the main points of the essay is needed.
Some insightfulcomments are made which shows a good understanding of the first chapter, social and historical context and an appreciation of the writer's intentions.
Textual references and close language analysis are inconsistent throughout the essay. Sometimes points are made with no further analysis or quotes. At otherr times very long quotes are included with minimal analysis.
More analysis and less retelling of narrative development. However thisis generally well written and does answer the question in some detail****.